January 26, 2013 by ConcertKatie No Comments 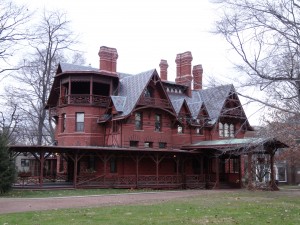 Every year it is my goal to get all the Connecticut pressed pennies that there are.  Every year I fail, but in 2012 I did add another one to the list – The Mark Twain House and Museum.  At first, I had said that after my Mom and I both read The Autobiography of Mark Twain we would “reward” ourselves by taking a field trip to the house – but neither of us were able to make it through the book.  I ended up winning tickets from one of the radio station so one weekend in December we went to check it out! 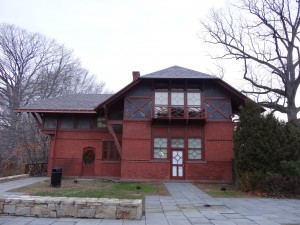 We weren’t allowed to take any photos in the actual home, since a lot of it is quite old.  (Or maybe so they could sell postcards showing the inside rooms for $1 each in the gift shop)  Our guide said that while not all of it is original, they do try to get pieces from the correct time period to replace them with how they may have been.  Since it was early December, the house was decorated for Christmas.
There have been some rumors that the house is haunted.  I have to say I didn’t really get that vibe, though if anyone is haunting it, it is most likely the oldest daughter who died in the home.
My favorite part of the house was the master bedroom – specifically Mark and his wife’s bed.  There were little cherubs all carved in to the head board and it was gorgeous.  It had cost Mark a pretty penny and he and his wife slept sitting up at the foot of the bed.  At the time, sleeping sitting up was quite popular and it probably wasn’t practical to be leaning against the carvings – but Mark had said that he faced that way because he spent so much on the bed that he wanted to be able to enjoy it!
The details in the home are amazing, the family definitely had money (or wanted to make it appear that they did), they had a formal dining room, a fancy fireplace that was decorated with some carvings of a family seal, the girls bedroom had their dolls and dollhouse (only 1 doll was original) and we found out that 1 of the daughters was actually very helpful and worked with the museum to help figure out where items went and all that – she was the one that had donated the bed. 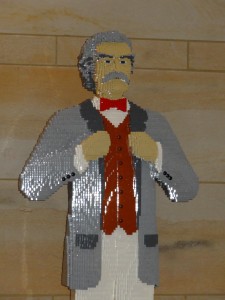 In the gift shop lobby is a life sized Twain made out of LEGOS!  (Also right next to it is the penny machine!)  Overall it was a fun tour and we also went to walk by Harriet Beecher Stowe’s house – she lived right across the walkway!