January 12, 2013 by ConcertKatie No Comments 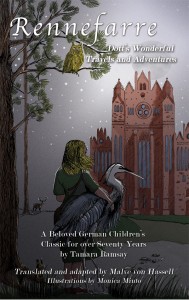 Rennefarre is quite an interesting book.  It is about a 12 year old girl named Dott.  Her parents put her and her sibling to bed and  head out to the midsummer festival.  Dott wants to see it all too and figures her siblings will be ok sleeping and sneaks out of the house to head to the festival.  As she is sneaking around to get to the festival unseen – the Rennefarre flower falls into her shoe.  This flower has amazing powers and makes Dott invisible! She also is able to see and hear things that no one else can see or hear – and talk to the animals she encounters.

The rest of the book chronicles Dotts travels and trying to get out of her predicament and travelling around.  The book also includes illustrations which helps bring all the characters to life a little bit more.  Every place that Dott visits in the book is based on real places and you can find them on the map.  There is a guide in the back of the book if you are interested in finding out more about her travels as well as some other facts about items referenced in the book.  There is a timeline in the book as well to give you some more supplemental information.

The book is a little bit long and it is also not the easiest to read- but if you stick with it, I think that you will really enjoy it, just as I did.

I received a free e-copy of this book in order to write this review. I was not otherwise compenated.

Imagine riding on the back of a blue heron across time and space. Imagine befriending crows, being kidnapped by magpies, and being given a lift on the back of a kindly stag. Imagine experiencing life as an outcast from human society, encountering spirits and mythical creatures from the world of legends, experiencing the plague in Dresden, and being chased through Berlin by Frederick the Great.

Dott is a twelve-year old girl. She lives in the countryside east of Berlin in an unspecified time between the two world wars. When Dott sneaks out to see the bonfire at the edge of her village on the evening of the midsummer night festival, she has no idea what will happen next. In the dark of night, the magical Rennefarre flower falls into her shoe. It not only makes her invisible, but also allows her to see things no one else could see. No longer able to stay with her parents and her young brother and sister, she begins her search to find a way out of her predicament.

Her quest to return home to her family winds its way through the cities and countryside of 20th century Germany—and beyond. As she befriends the local animals, they help her on her way with gifts of food, shelter, and—through the help of a kind spirit—a magical cup which allows her to become small and ride on the backs of the birds.

Flying across the country on the backs of crows and herons, Dott finds herself seeing the country not only as it is, but also as it used to be. She lives through moments in history others can only read about—meeting historical kings and fanciful spirits along the way. But, even with all of the excitement of her travels, she always has one goal in mind: returning home to her family.

Part coming-of-age story, part fantasy, and part social-cultural portrait of Eastern Germany in the early part of the 20th century, the book covers real ground. That is, one could follow Dott’s travels on a map of the area. Seamlessly blending elements of fantasy and history, the book contains a fascinating array of details of day-to-day life in rural and urban areas in eastern Germany. Dott’s adventures are interwoven with folklore and myths as well as vivid accounts of different eras and the diverse cultural and ethnic strains that have formed the basis for a rich and complex history of Germany and Eastern Europe. Written on the eve of World War II, the book offers a sobering perspective on the human potential for causing devastation. At the same time it is filled with hope. In one scene, Dott gets a glimpse of the future — an utterly destroyed cityscape; it inspires her to look to her own responsibilities and actions in life.