January 27, 2013 by ConcertKatie No Comments 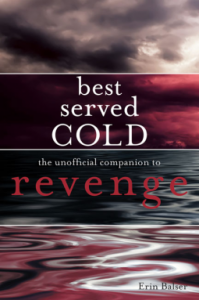 Best Served Cold is a companion book for the ABC hit show Revenge.  It dissects the characters and talks a bit about what other characters in other books and shows are similar to them.  There are also photos throughout the book in case you forgot who is who (I have a big problem with that!) or haven’t seen the show before but are looking to catch up and dive right in to the new episodes! Speaking of catching up – there are also synopsis on the Season 1 episodes for a refresher or if you are looking for Revenge 101.

I started watching mid-season 1, so it was nice to catch up and see a timeline of everything that had happened that I had missed. If you are a fan of the show and are looking for some similar reading material or other shows to check out with characters similar to Emily Thorne or any of you favorite characters, be sure to check out the book. It is an easy read and will give you many ideas!

Also recommended for those who want to tune in now, missed the first season or just want a recap and some supplemental material on the show and its characters.

I received a free e-copy of this book in order to write this review .I was not otherwise compensated.

A critical and commercial hit, Revenge has a rabid and rapidly growing fan base. It’s consistently the #1 show in its timeslot and it’s ABC’s biggest primetime hit since Lost, the first series in four years to match that show’s success in the coveted 18-49 demographic.

A fast-paced and complicated character-driven show with many plot twists and unanswered questions, fans will welcome insight and analysis into Emily Thorne’s master plan in this intelligent but playful companion to the series. Explorations of themes, characters, the show’s soapy and literary inspirations, and real-world events make this the must-have book for everyone who is watchingRevenge.