January 31, 2013 by ConcertKatie No Comments 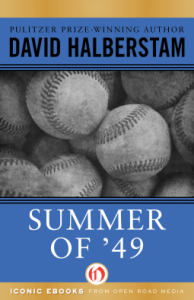 Yankees vs Red Sox… growing up in Connecticut, this is a rivalry I am all too familiar with (though I typically pay no attention to it as I’m a Mets fan).  However, this rivalry has been going on for years and years and years. It has been passed down through generations.

Summer of ’49 focuses on the pennant race between the two teams and some of the games they played against each other.  But more than that, the book gives you insight to the players and also to the state that America was in at the time.  With the world war having ended not too long before, America was looking to once again be united and they looked for that to come through the past time of baseball.

I liked how the book gave you insight on the players as well.  It could have just said so and so came to bat and this is what happened, but it gave some background too so you could have a better idea of just what these games and at-bats really meant.

I thought the book was well written and easy to read and if you are a baseball fan – or more specifically a Yankees fan I think you’ll really enjoy it.  Red Sox and Mets fans may not as much ;).

Halberstam’s classic #1 bestseller, about the magical summer when baseball’s fiercest rivalry captured the nation’s imagination, and changed the sport forever


The summer of 1949: It was baseball’s Golden Age and the year Joe DiMaggio’s New York Yankees were locked in a soon-to-be classic battle with Ted Williams’s Boston Red Sox for the American League pennant. As postwar America looked for a unifying moment, the greatest players in baseball history brought their rivalry to the field, captivating the American public through the heart-pounding final moments of the season. This expansive story captures an era, incorporating profiles of the players and their families, fans, broadcasters, baseball executives, and sportswriters. Riveting in its blend of powerful detail and exhilarating narrative, The Summer of ’49 is Pulitzer Prize–winner David Halberstam’s engrossing look at not only a sports rivalry, but at a time when America’s very identity was wrapped up in its beloved national game.�This ebook features an extended biography of David Halberstam.