October 17, 2013 by ConcertKatie No Comments 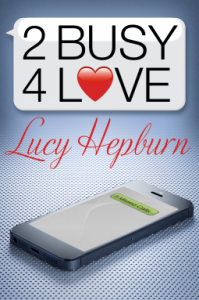 2 Busy 4 Love is about a girl named Christy who relies heavily on her iPhone.  (and is too busy for love!) Then one day on her way to the airport to pick up her sisters fiance that she has yet to meet, she leaves her phone on the train and a guy named Will picked it up! Christy runs her own business as a personal assistant and all her appointments are on the phone.  What should she do now?

When she arrives at the airport she meets up with someone named Antonio, not knowing right away that it is not her future brother in law. He ends up hanging out with her for the day helping her get all her errands done although Toni speaks only Italian and Christy only English – all the while  Christy is talking to Will on an “emergency” phone given to her by an employee of the airport – who carries around THREE PHONES and lets Christy borrow one!

Will is hanging out with his dad’s assistant who is setting up that engagement party for that night.  But he keeps taking Christy’s calls to help her out and seems to be a bit flirty with her as well. There are several other side stories going on – but I don’t really want to mention them in too much detail because they all go along with a twist that I don’t want to give away! (Although I caught on pretty quickly to it – you may too.)

Will they all meet up and Christy get her phone back? Will she end up with more than just her phone? Hmm…

A lot of the situations in the story are incredibly far fetched, but if you get beyond that it is a bit of a cute story.  It’s a fun and easy light read.

A  handsome stranger almost makes up for a lost phone in a comedy of errors across New York City.

Christy prides herself on her efficiency as a personal assistant, fueled by her ever-present iPhone. When she loses the phone on the train on the day of her sister’s engagement party, Christy is sure the day is ruined – until she borrows a phone to reach Will, the cute guy who picked up hers for safe keeping. Dealing with family emergencies of his own, he can’t meet her until the evening, but maybe there’s still hope. Christy enlists Will as her own personal assistant, feeding her addresses and schedules throughout the day.

Determined to meet the high expectations of her clients, not to mention the preparations for the engagement party, Christy dashes back and forth across New York City saving spoiled dogs from impatient groomers, shoving oriental rugs into too-small cabs, and carefully avoiding Twitter-obsessed socialites, all with Will’s calming voice in her ear guiding the way. Juggling his own misadventures with his cantankerous father and his flighty assistant, Will begins counting the hours until he can be properly introduced to the woman who has drawn him in with nothing more than a sexy voice and an overly complicated phone.