October 7, 2013 by ConcertKatie No Comments 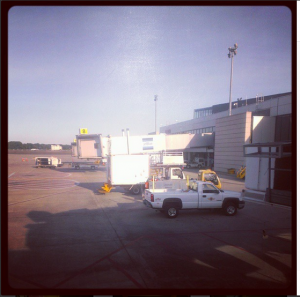 Last month I took a trip to Las Vegas, since we had some date changes I couldn’t allot blog time to the posts but all this month look for a second post on select days chronicling my trip.

Unfortunately due to the date changes, I couldn’t get a direct flight on the way there. I had to have a layover in Chicago.

I got to the airport super early and due to my leg brace got to have a TSA pat down. Usually they put me through the X-Ray machine with my shoes on and then wipe my shoes down but their policy must have changed.  Or it changes depending on who you talk to that works there.

I got to my gate to see that flight before mine was delayed. I had hope that wouldn’t be a sign of thing to come but I was able to preboard and the flight attendants were calling me miss orange. Note to self, don’t wear an orange shirt when flying with an orange suitcase! Everything was going fine until Mr Douche decided he wanted to sit next to me.

This guy was everything you DONT want next to you. FIrst he threw his newspaper and book down to his seat, hitting me.  Any kind of oops sorry? Not at all. Then he threw his jacket at the seat (and me).  He was mad the woman on the aisle got up when he approached her because he needed to put his bag up first.  I think she may have spoke a different language and didn’t understand beyond that he wanted to sit in the middle… Then he used both arm rests – leaned way too far into me when he was reading and I was reading a magazine (I was squished against the window practically) and closed my window shade without even asking me if that would be ok. Awful, awful seat buddy! 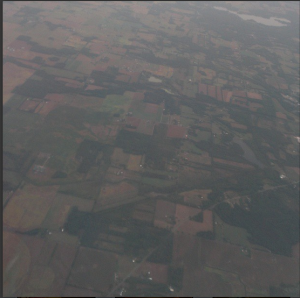 I fell asleep and missed snacks and drinks and was starving by the time we landed in Chicago. I had 16 gates to navigate (or 8, since it alternated on sides of the hallway) and every ‘fast’ food place had a crazy line and I didn’t have much time.

Flight 2 ended up delayed because of a medical emergency, I dont know if it was on the flight i was going to be boarding or one that was just blocking the tarmac and our flight from coming in, but we finally boarded about 10 minutes late.

Book Review: How To Watch Television 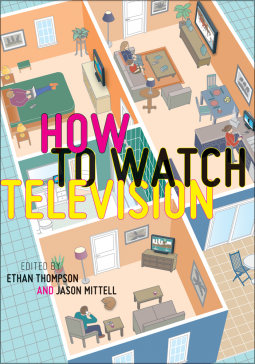 How To Watch Television is a book compiled of a series of essays about various TV shows.  Each essay is for a different TV show by a different author and focuses on different aspects of the TV shows such as character development.  I found that I was much more interested in the essays of shows I was familiar with versus the shows I had never seen or heard of before.  If you have a love of television, this should be an interesting read.  The book does focus mainly on American TV shows as well so if you are not from America you may not know many of the shows.

This book is geared towards discussion as well and would work best if reading in a group or in a classroom situation.  I read it by myself and now have no one to discuss things with except here, and I don’t quite feel like dishing it all out (maybe someday?)  The end of each essay has a notes section with extra information about what was written in the essay as well as further reading in case you are using this book as a reference piece.

All genres seem to be represented – from UK shows who were reworked for the US, Children’s shows, Dramas, Comedies, etc.

I received a free e-copy of this book from the publisher in order to write this review I was not otherwise compensated.

We all have opinions about the television shows we watch, but television criticism is about much more than simply evaluating the merits of a particular show and deeming it ‘good’ or ‘bad.’ Rather, criticism uses the close examination of a television program to explore that program’s cultural significance, creative strategies, and its place in a broader social context.

How to Watch Television brings together forty original essays from today’s leading scholars on television culture, writing about the programs they care (and think) the most about. Each essay focuses on a particular television show, demonstrating one way to read the program and, through it, our media culture. The essays model how to practice media criticism in accessible language, providing critical insights through analysis—suggesting a way of looking at TV that students and interested viewers might emulate. The contributors discuss a wide range of television programs past and present, covering many formats and genres, spanning fiction and non-fiction, broadcast and cable, providing a broad representation of the programs that are likely to be covered in a media studies course. While the book primarily focuses on American television, important programs with international origins and transnational circulation are also covered.

Addressing television series from the medium’s earliest days to contemporary online transformations of television, How to Watch Television is designed to engender classroom discussion among television critics of all backgrounds.

Ethan Thompson is Associate Professor at Texas A&M University – Corpus Christi. He is the author of Parody and Taste in Postwar American Television Culture, and co-editor of Satire TV: Politics and Comedy in the Post-Network Era.