October 22, 2013 by ConcertKatie No Comments 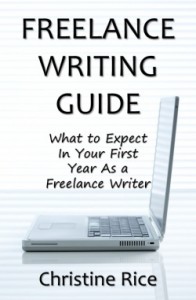 Freelance Writing Guide: What To Expect In Your First Year as a Freelance Writer is full of everything you need to know to become successful at freelance writing.  The book isn’t that long, only 60 or so pages, but it is chock full of so much great information! I’ve always wanted to be a writer and aside from this blog, I’m never really sure how to go about getting my work out there.  Now I know where I should be looking and what I should be doing to put together a portfolio and to get started looking for opportunities.  I also know I need to be patient and to expect rejections.  And there’s even a list of courses that you can take to help better your writing skills.  Considering I am still working on some computer classes, I’ll have to get my act together and finish those first – then I’ll look in to some writing related ones!

If you are even the slightest bit interested in being a freelance writer, be sure to check out this book. It will definitely get you prepared to figure out if it is something you definitely want to pursue or not.  I am looking forward to the next book – what to expect in your second year as a freelance writer!

Freelance Writing Guide: What to Expect in Your First Year as a Freelance Writer is a resourceful book that informs readers what they can expect during the first year of a freelance writing career. The information is presented honestly and directly, covering everything the author experienced in her first year as a freelance writer in an informational and insightful manner.

Book Review: All The Songs 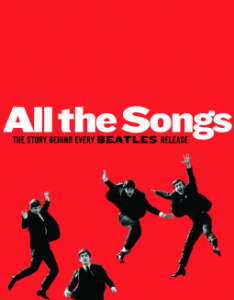 All The Songs is a book that compiles the stories because ALL of the Beatles songs. Yes, ALL the songs.  The book was actually so huge that they had to have reviewers download it as two separate files because it is just enormous.  Book 1 had 336 pages and Book 2, 337!  It is honestly probably the only compilation any Beatles fan would need.  In addition to the stories of all the songs it also has a lot of photos mixed in throughout as well and the first song even has a post it note included that there is uncertainty on the date for the very first recording – which was “My Bonnie” – this song was done before Ringo had joined the band and Pete Best was still the drummer.

Each song is listed in chronological order from when it was written/recorded (as best known.)  It also includes how long the song was, who wrote it, what musicians were on it, where and when it was recorded (and even sometimes what studio), how many takes it took, the mixing studio and date and the technical team.  And there are also some post-it notes with some interesting facts about the songs for Beatles fanatics.

Interesting on the song  “Boys” – it was done in just one take however it mentions that Ringo isn’t consistent with the tempo throughout the song.  Also notable – Hey Jude was done in 1 take as well.

While the book may be super long it is also super interesting and must have taken FOREVER to compile so much information. (Which is code for… Katie don’t get any ideas.) Honestly, every Beatles fan should check this out. And for you fanatics – there will be notes for you throughout!

Every album and every song ever released by the Beatles—from “Please Please Me” (U.S. 1963) to “The Long and Winding Road” (U.S. 1970)—is dissected, discussed, and analyzed by two music historians in this lively and fully illustrated work.

All the Songs delves deep into the history and origins of the Beatles and their music. This first-of-its-kind book draws upon decades of research, as music historians Margotin and Guesdon recount the circumstances that led to the composition of every song, the recording process, and the instruments used.

Here, we learn that one of John Lennon’s favorite guitars was a 1958 Rickenbacker 325 Capri, which he bought for £100 in 1960 in Hamburg, Germany. We also learn that “Love Me Do,” recorded in Abbey Road Studios in September 1962, took 18 takes to get right, even though it was one of the first songs John and Paul ever wrote together. And the authors reveal that when the Beatles performed “I Want to Hold Your Hand” on The Ed Sullivan Show in 1964, John’s microphone wasn’t turned on, so viewers heard only Paul singing.

The hundreds of photographs throughout the book include rare black-and-white publicity stills, images of Beatles instruments, and engaging shots of the musicians in-studio.

All the Songs is the must-have Beatles book for the any true Beatles fan.