October 31, 2013 by ConcertKatie No Comments

myVegas slots is no longer just on Facebook, it is now an app for Android phones as well (I don’t know if it’s available for iPhones)

Things are a little bit different than on the Facebook version and the only thing you share between versions (if you hook the app up to your Facebook) is your Loyalty Points. Which is the most important thing, anyway. The proliferation of such games into the internet has profoundly impacted the exoskeleton of search engine, which we term as SEO, a conglomeration of UK search engine optimisation experts profess.

You must start from level 1 over again on the App and for now there are only 3 games available – Excalibur, New York New York and Mirage (with the last 2 being unlocked once you reach a certain level)  These games are similar to the ones on the Facebook app, but the bonus rounds are much different as some of them even provide Word villas answers if done the right way. There is no “high/low” or anything like that there is generally 3 bonuses – the free spins, one where you spin a wheel (some spin multiple times for multipliers, etc) and one where you have to pick things.  In Excalibur you pick 3 tiles and then pick a sword for a multiplier bonus.  In New York New York you keep picking until you’ve been “busted” 3 times and in Mirage you pop balloons. You start with 5 but some of the pops give you +2 picks so on the last 2 games it is possible to clean up the whole board, if you’re lucky!

The other slots say that they are coming soon.

Every hour you get bonus coins.  In the beginning I was getting 300 and now I’m only getting 250 – I don’t know if they changed it completely since I started playing or if you get less once you get to a certain level. (I’m currently 16)

Once you unlock the strip – things are very different here than in the Facebook app.  There are Bronze, Silver and Gold levels.  Right now I’m just doing the Bronze and it gives you some sort of challenge.  Some of them are quick and others seem impossible.  For instance – you may have to get 160 pretzels while playing New York New York.  This is when you’ll want to bet less because you want to get more spins and more chances at pretzels popping up.  For challenges where you need to earn loyalty points or XP it may be wiser to bet more to win more.  One was to get a 10 win streak going.  I got up to 6 multiple times but it took a while to actually win 10 spins in a row!  This keeps me stuck to one game at a time to try and do the challenges.

Currently I am 34% (it tells you your progress, which is nice) to earning 93,000 XP in New York New York.  I’ve been getting maybe 1% if I am lucky per hour with my bonus coins.  I’ll be trying to finish this one for a while I think, unless I win a big jackpot!

You do also get the spin the wheel bonus once each day like on the Facebook App and the multipliers for days played, etc are calculated different.

Loyalty Points are a bit different as well. On the Facebook app once you fill the coin up you get 10 points.  On the phone app you need to fill it up multiple times (I want to say 5, but I’ve never actually counted) and once you do you get 35 points.

If you want to skip any of the star challenges you can do so for a fee of $0.99 and you can also buy chips through the game for various prices if you so choose as well.

I think that I prefer to facebook version, but since I can’t play that all day this will have to work for now 🙂

SendOutCards enables you to reach out and touch someone with an online service which helps you send personalized, printed greeting cards and gifts through the mail with just a few clicks of your computer.  It is super easy to pick out a card you want to send, submit an address and send it out to any recipient.  I chose to send it to myself so that I could see how long it took to arrive.  (About 3-4 days from when I submitted the order, which was fast!)  The card is great quality and super cute – even if it is a scary monster 😉 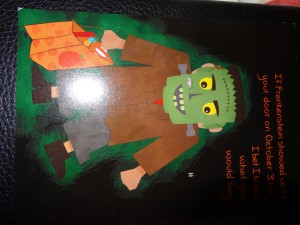 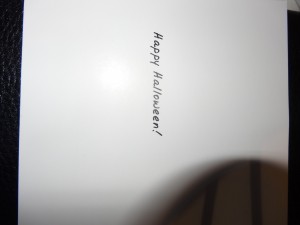 I belong to several post card swap groups that I have been inactive on since we started the move – I can’t wait to make my triumphant return all while telling them about how they too can get a free Greeting Card from Send Out Cards! 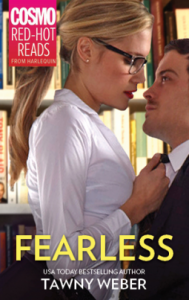 Fearless is about a girl named Gia and her friends, though mostly Gia.  She is hanging out with them for a girls night out and realized that her sex life is missing and she is bored.  Her friends ask her who her fantasy is and she mentions a hot coworker, Luke.  Office gossip is that he will be accepting a job in a new location soon so she only has a couple of weeks to make her move or she risks losing the chance forever.

Her and her friends devise a plan to give her a disguise and have her show up in Vegas where Luke will be for the weekend and see if she can have her fantasy fulfilled.  She succeeds, but then realizes that maybe they have more of a connection than just in the bedroom.

When they get back to work, Gia is pleased to find out that she has a promotion!  But her new boss? Luke.  Due to what Gia’s alter-ego told him in Vegas, he decided to take the job that would challenge him.  Will he figure out that it was Gia in Vegas? What happens if he does?  Gia is going out of her way to make sure that doesn’t happen…

Another quick and fun read from Cosmo.  This was a fun one, because you wanted Gia to succeed in Vegas but I don’t think anyone realized just how well her whole plan would end up going down.  And then of course when they get back to work – things get even more intense because Gia feels like she has to hide and telecommute so that Luke won’t put two and two together.  Although she thinks he is great in all aspects of his life so he must be smart enough to figure her out? Right?

The best of friends: check

Everything is going according to plan—until Gia discovers that Luke is perfect for her outside the bedroom too. And suddenly she’s no longer content to let what happens in Vegas stays in Vegas…