November 17, 2012 by ConcertKatie No Comments

Time for the Top 12. Things have changed a bit and it is possible that an entire team could get knocked out  – there are no guarantees that each team will move on each round.  I really like this because sometimes one team is stacked a bit better than the others – it will be interesting to see how that ends up turning out!

Michaela – Blow Me One Last Kiss – I really like her and it was nice to see a different hairdo other than the mohawk! Though I do think she had some trouble keeping up with the song and breathing – it’s not easy!

Dez – Can’t Take My Eyes Off Of You – Very strong performance from him. And he’s cute so I think he’ll have no problem going through again

Amanda – Spectrum – I didn’t like this performance from her at all, which is a bummer because she was so good previously!

Bryan – Back to Black – Loved this performance from Bryan. It was nearly perfect to me.

Cassadee – Behind These Hazel Eyes – It was a good performance from her. But I can’t say I’m a fan.

Trevin – When A Man Loves a Woman – Awesome performance from Trevin! Maybe even the best of the night!

Melanie – Cough Syrup – I think this was a good song for her and she did well but I’m still not team melanie.

Nicholas – Power Of Love – Another great performance from Nicholas. I see him going far (now that I know America likes him too!)

Sylvia – My Heart Will Go On – Wasn’t a fan of this performance.  Might have been bad enough to send her home, but it wasn’t fantastic.

Terry – More Than a Feeling – a great performance to end the night!

Who I think is going home:  Sylvia and Adriana

CeeLo and his team perform (and CeeLo flashes the camera…)

Blake and his team perform

Michaela, Adriana, Cody and Melanie are all at risk of going home.  Hey, at least 1 that I predicted as going home is in there!

Well, I was 50% right, but I am super bummed about Michaela! She did have a bit of an off week and America didn’t vote her through to begin with, but I really liked her! 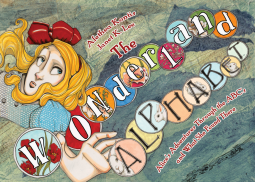 The Wonderland Alphabet is a short book chronicling the characters of Alice in Wonderland (and other important pieces of Wonderland) from A to Z.  Each letter is devoted to one topic and one page in the book.  There is a short write up about each of the items on each page as well.

The book is wonderfully illustrated and really captures the true essence of the characters, I think!  The Illustrations are by Janet K. Lee and the verses are written by Alethea Kontis.  Of course, the characters are inspired by Alice’s Adventures in Wonderland and Through the Looking-Glass by Lewis Carroll.

The Disney version of Alice is one of my favorite movies, I’ve also seen the Tim Burton version but shockingly enough have not read the books.  I think that this Alphabet would be a great precursor to anyone looking to read the books that might not know anything about the story.  Or of course for anyone who loves the character and the story and wants to check out an additional version.