November 19, 2012 by ConcertKatie No Comments 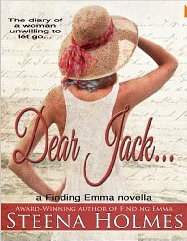 Dear Jack is a novella that goes along with the book I read and reviewed a few months back, Finding Emma. Dear Jack is supposed to tide us over until Emma’s Secret comes out and an excerpt is even included from the sequel.

The book is a series of letters written the Jack as he is away at war.  It is all written in a journal, so Jack never sees them.  She tells Jack what is going on at home, with Mary, and other things going on while he is away.

The letters seem to get angrier and angrier the longer Jack is away.  We find out that Jack went missing in action and his best friend Doug (“Uncle Doug” to Mary) is told that if he is MIA for more than 3 months to take care of the family.

At first, Dottie isn’t too interested in this – she just wants Jack to come back and doesn’t believe he is dead.  But as more months pass, she thinks that she will agree to marry him…

The book gives more insight in to Dottie – a character that was in and out of the “real world” in Finding Emma.  It is nice to see some back story to her from before her medical issues began.  She is a very strong person and tried her best to keep things normal for Mary while her dad was away.

I purchased this book from Amazon in order to write this review. By posting this review I am entered into a prize drawing.  I was not otherwise compensated.

Dear Jack…the journal of a woman unwilling to let go.

Dottie is a woman with a heart full of emotions but unable to express them unless through her journals. When Jack goes off to war, Dottie is left behind having to be strong for their young daughter, Mary.

While Jack is away, she keeps a journal full of letters for Jack, for him to read when he comes home. Except, word comes that Jack has gone missing and leaves Dottie to fend for herself. She keeps hope that her husband is alive and will be coming home, until Jack’s personal effects are returned to her by a member of Jack’s unit.

When Doug shares with her a letter Jack wrote for her in case he never came home her world falls apart and it’s all she can do to hold herself together for Mary.

Were you one of the readers who wanted to know about the story behind Dottie and Doug? This is where you’ll find out.