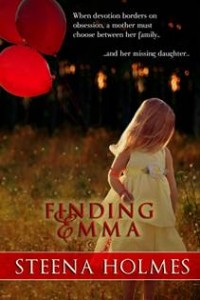 Finding Emma is by Steena Holmes and tells the story of two families.  The Taylor’s, Megan and her husband Peter and their 3 daughters – Hannah, Alexis and Emma.  When Emma is a toddler she disappears and is believed by her family to have been kidnapped.  The tradgedy nearly rips the family apart as Megan tries to do everything she can to find Emma, even if that means pushing her husband away and not keeping promises and not paying attention to her two other daughters as she probably should be.  Each member of the family has their own insecurites which become bigger throughout the book.  Megan sees Emma everywhere, but is afraid to ever say anything about it because she has told her husband that she will move on.  With her marriage falling apart, she is paranoid that Peter is having an affair with the new partner at his job.  Peter doesn’t know what to do with Megan and believes that there is something going on between her and the Detective assigned to Emma’s case.  The oldest daughter, Hannah, believes it is her fault that Emma left the house because she went outside first.  And Alexis wishes that it was her who was taken instead of Emma because then she’d be the one getting all the attention at home. All this unfolds in the two years since Emma’s dissappearance.

The other family is Dottie and Jack.  They lost their daughter, Mary.  Jack only finds this out recently because he called the home he believed she was living at and was told this information.  Dottie’s health and memory are not what they used to be.  All Jack knows is that Emmie is Mary’s daughter and Dottie brought her home to live with them 2 years ago.  Dottie doesn’t like her leaving the house and asks that Jack not bring her to meet his friends and even doesn’t want Emmie playing with the neighborhood kids.  Once Emmie does start playing with the neighbors, she begins talking about her sisters, something she had never brought up in the two years previous.  Jack wonders if Emmie just has an over active imagination or if Dottie is not being completely honest about Emmie.  He starts piecing clues together from things Dottie says when she is in and out of the real world.  She mentions that she found Emmie on the street.

Meanwhile, both families end up going to a fair.  This is the fair that the Taylor’s were gearing up to go to for Emma’s birthday, the day she disappeared.  They ended up not going and had not returned since.  Peter thinks it might be a good idea to help them all move on if they go and have a good time.  Dottie and Jack also have not been to the fair in some time but decide that Emmie is now old enough to  experience it.  Megan takes a photo of her family and sees an older couple with a small child in the background.  After blowing up the photo she is convinced that it is Emma in the photo – based on the age progressed photos that she was given by the police detective.  Peter thinks she is losing it and wants her to go back to counseling, but sends the information over to the Detective anyway.

Is Emmie really Emma?  Well, you’ll just have to read Finding Emma to find out for sure!

I really enjoyed this book – it was a relatively quick read and 35 chapters.  I didn’t want to put it down because I really wanted to find out what would happen for the two families.  I became attached to all the characters rather quickly.  I really wanted Megan’s life to go back to normal and for her to find her daughter.  Her marriage was suffering and the best thing for her would be to have Peter there for her again.  The girls would also be in a better situation with their sister back so they don’t feel like they are walking on eggshells and upset that they were not the “favorite” daughters.  I felt for Jack and Dottie as well.  Dottie obbiously didn’t know what was going on with her life and often mistaked Emmie for Mary, their daughter that left because of her parenting.  Poor Jack was just stuck in the middle – his daughter had still loved him but had to leave and live the life she had chosen for herself.  He had some of that love back with Emmie – but then wasn’t sure if he was really her Papa or not.

It was a bit of a thriller and as I said I couldn’t put it down.  I definitely recommend this book to anyone looking for a quick read that might tug at your heart strings a bit and has a bit of a mystery to it as well.  50% of the proceeds from the book will be donated to the Missing Children’s Society of Canada.

There is a sequel to this book, Emma’s Secret, that will be coming out soon.  To keep up to date on the progress of the book and to sign up for the mailing list, head over to www.sheenaholmes.com

The story details a child torn from the arms of loving parents, a heart-breaking story of a mother’s journey of hope… Megan sees her daughter Emma everywhere. She’s the little girl standing in the supermarket, the child waiting for the swings at the playground, the girl with ice cream dripping down her face. But it’s never Emma — because Emma’s been missing for two years. Unable to handle the constant heartache of all the false sightings, Megan’s husband threatens to walk away unless Megan can agree to accept Emma is gone. Megan’s life and marriage is crumbling all around her and she realizes she may have to do the thing she dreads most: move on. When Megan takes a photo of a little girl with an elderly couple at the town fair, she believes it to be her missing daughter. Unable to let go, she sets in motion a sequence of events that could destroy both family’s lives.