November 24, 2012 by ConcertKatie No Comments

The Voice had the Top 10 perform this week.  But we were first treated to a performance from Christina and Blake.  I guess they are really trying to help Christina get some more record sales.  And waste time. Because if there is one thing The Voice is good at – it is wasting time!

I am also blogging this while playing along live with VIGGLE for the first time (I just signed up this week!) So if my post seems a bit distracted, it is because I am trying to answer trivia while watching.

Sylvia – Girl On Fire  – A few pitchy points and there is still something about her I don’t like. I’m not sure she’ll make it through to next week.

Terry – Summer of 69 – My mom thinks he could be this years winner.  He is very solid and consistent with his performances so I think she could be right!

Cody – Crazy In Love – Not sure how I feel about the outfit (Mom says he thinks hes Adam Lambert) Mediocre performance.

Bryan – New York State of Mind – It is so crazy to think he used to front a metal band! This was a great performance.

Nicholas – Lean on Me – Another great performance from Nicholas.

Trevin – Scream – A little screechy, but considering the song is called Scream I guess I can let it slide. Another good performance from Trevin.

Cassadee – Over You  – Ok performance. I dont know. I couldnt get into it s much as I would have liked

Dez – Feeling Good – What a great performance to end the night with!

Another safe – Melanie (one wrong and im nervous because i like a lot of the ones left!)

Who else be safe – Terry

Sylvia, Trevin, Bryan and Amanda are left… who will make it to the top 8?

Which means Sylvia and Bryan will be leaving us.  Just when I decided I liked Bryan. Of course.

Book Review: Hickey of the Beast 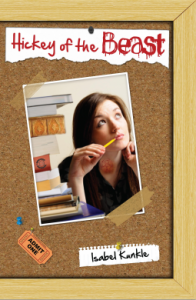 This book starts out innocently enough.  Connie is writing a letter to her friend Amanda.  Connie lives in New England and Amanda lives in Pennsylvania.  She is telling her all about her freshman year at Springden Academy.  She mentions that there may be some stuff in the letter that Amanda won’t believe.

She keeps having weird nightmares.  Her younger brother is having nightmares too.  Whenever she sees a classmate in her dream, the classmate ends up falling ill the next day suspiciously.  It takes her a while to put two and two together.

Next thing we know there is some sort of strange creature that is preying on her classmates and it seems like the next one on her list is her best friend!  Connie seems to be the only one to stop this… thing.  Can she do it or will she become it’s next victim?

I thought this was a great young adult novel, using the supernatural that seems to be so popular lately as a part of the story as well.  It is well written and easy to read – 30 chapters, almost 200 pages and I had no problem reading it in a day.

Bad dreams? No big deal. After all, Connie Perez is starting her first year in the prep school her mom runs. Anyone would be a little stressed, right? When she starts dreaming about strange creatures and places that don’t make sense, she doesn’t think much about it: there’s other stuff on her mind. Then she starts noticing that the people she dreams about get sick right afterwards.

Then everything gets weird.

There’s something bad on the campus of Springden Academy. Something that feeds on students and warps their minds. And, as Connie and her friends try to figure out what’s going on, it starts to look like she’s the only one who can stop it. Freshman year was hard enough without having to fight evil after class.

Hickey of the Beast is a hilarious look at coming of age in a school where there are no secrets, but plenty of mysteries, and where supernatural studies take on a whole new meaning. It’s a story about all the things that make growing up hell: boys, history class, annoying little brothers, and saving the world from evil. When the supernatural comes to school, it’s no field day – and that’s before you factor in homework.