November 9, 2012 by ConcertKatie No Comments

This week the top 12 perform and America gets to vote! They are also bragging about a HUGE TWIST… and they will be having another finalist return because they made a mistake… so we will now have a Top 13… welcome back Diamond White! (Certainly not who I would have brought back, but, ok.)

This week’s theme: Songs from The Movies

Arin Ray – American Boy – I think this was a strong performance from him and a good way to kick of the week.

Paige Thomas – Take My Breath Away – Not as impressed with this performance. I don’t know what happened because I do like her but her singing was not the best I’ve heard from her.

Vino Alan – When A Man Loves a Woman – So good! And I loved the East Coast shout out from him as well.

Emblem 3 – My Girl / California Girls – I could have gone without them trying to make it sound like One Direction… but.. oh, I love them.

Beatrice Miller – Iris – There is just something about her I don’t really like.

Jennel Garcia – I Love Rock N Roll – She is good, but I think she got too shouty at some parts. Not enough to warrant going home though.

Tate Stevens – Dead or Alive – He is a strong singer. I see that LA is trying to keep all his performances scaled back.

Diamond White – I Have Nothing – going for it all with this comeback performance, I  see.  She is really good. Whitney good? Probably not. But she should stick around for a while.

Cece Frey – Eye of the Tiger – Oh hey the Leopard tattoos are back. And the ability to sing is STILL MISSING!  (Why did Cece get through and not Jillian?)

Carly Rose – It Will Rain – A nice stripped back performance from Carly Rose. She has such a powerful voice and I know I’m totally biased, but I love her.

Jason Brock – I Believe I Can Fly – I think I am over Jason at this point.

Fifth Harmony – 1000 years – Not a fan of the song but I am hoping that they go somewhere because we really need a poppy girl group again!

My bottom 3 are Paige, Jason and Beatrice.  With most likely Paige being the one to go home.

The results show kicked off with ONE DIRECTION! Yeah!

Also through – Paige Thomas (Wow I stink at picking!!)

Next through – Diamond White

Also back next week – Vino Alan!

Next act through – Jennel Garcia

Another 5 will go through leaving 2 to sing for survival!

Safe and through – Carly Rose! (whew!)

Leaves us with CeCe Frey, Jason Brock and 5th Harmony

The next one through – Fifth Harmony

Jason and CeCe must sing for their life.

Well, I got 1 out of the bottom right (even with them having a bottom 2 and me picking 3!) but to be quite honest, I’d rather see CeCe leave than Jason!

CeCe sings You Haven’t Seen The Last Of Me. I’ll give her a bit of a pass because she is full of nerves, but it wasn’t that great, even with the pass.

Jason sings Total Eclipse of the Heart. He doesn’t seem to be affected by nerves.

From those 2 performances I would send home CeCe. Let’s see what the judges do…

We go to deadlock and the act going home will be the act that got the lowest number of votes from America’s votes.

The act with the lowest number of votes is – Jason.

I am bummed to see him go, but I am bittersweet since he was one of my bottom picks. 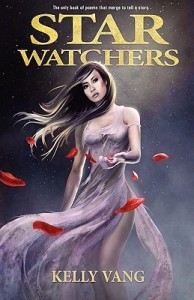 Star Watchers: Inspirational, Romantic and Dark Poems that Merge to Tell a Single Story is a book by Kelly Vang.  This book is interesting because on the surface it contains over 50 different poems.  Several of the poems have characters that overlap and tell another story, so you have to pay attention.  The poems are written in an Edgar Allan Poe inspired way and if you enjoy his work (like I do) I think you will enjoy these poems.

The challenge is to figure out which poems piece together the larger story, called Star Watchers. The key is to pay close attention to the reappearance of characters and phrases; particularly, the series of poems also entitled, Star Watchers.

My favorite of the poems was called “The Fall”, I seemed to relate to that one the most.

This is definitely an interesting approach to a book – with only some of the poems interlinking to create a completely different story.  It definitely made you pay extra attention and think while you were reading each of the individual poems.

Star Watchers uses fantasy, horror, and inspirational elements to provoke new ways of seeing the human condition. The poetry depicts unhappy, nervous, bitter and clever individuals; they found themselves in both triumphs and defeats. Unfortunately, these characters often met with the fate of tragedy and unexpected twist. Their misfortunes serve not only to entertain but also to inform its readership. Each poem and each character draws out a meaningful message for readers to take away with them. Yet, after piecing the poems together, there is an even bigger story–left for readers to determine for themselves.