Book Review: EVERY DAY IS AN ATHEIST HOLIDAY

November 15, 2012 by ConcertKatie No Comments 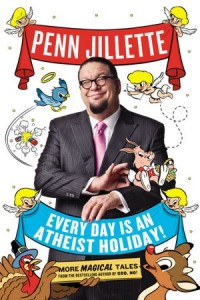 Every Day is an Athiest Holiday is book by Penn Jillette, one half of the magic act Penn & Teller.  The book’s chapters revolve around holidays (for the most part) and Penn tells various stories about his life and career that kind of revolve around the holidays.  He starts at the end of the year and works his way forward.

There are also quite a few mentions of his stint on The Celebrity Apprentice and many of the mentions revolve around how he didn’t like Clay Aiken.  At the end of the book though he says he has nothing against him – but he goes on and on about him in the chapters – so if you are a Clay fan you might want to go into those pages with an open mind or skip them entirely.  ( I know that many Clay fans have misconstrued things that I have written about Clay, so that is why I give the warning)

It talks about his family, his career, his childhood, etc.  Definitely an intersting read for fans of Penn & Teller or more casual fans (such as myself)  He really has a way with words and I especially liked his phone conversation with one of the cast members at EPCOT… but you’ll have to check out the book to hear more about that!

The larger, louder half of legendary magic act Penn & Teller, and New York Times-bestselling author of God, No!, is back with a new collection of spiritual rants and hilarious ravings – the perfect year-round gift, when you consider that Every Day Is an Atheist Holiday.