November 10, 2012 by ConcertKatie No Comments

Team Adam and Team Blake take the stage tonight for the first episode of the playoffs.  2 artists from each team will be going home, 3 will make it through.  America will pick 2 of the 3, with the coaches having the final say.  I don’t understand why the contestants didn’t alternate between Team Adam and Blake and we had some go back to back instead. It seems like it would have been more fair to just alternate than end the night with two of team Adam’s?

Night 2 brought us Team XTina vs Team CeeLo. With it being up against XFactor, I opted to catch it online the next day which is why you may see some comment about skipping and bad video.  Only a couple weren’t great quality for me so I think I got the idea of the performances enough to throw together some thoughts.

Joselyn – Give Your Heart a Break – She seemed too breathy and I wasn’t overly impressed with her.

Melanie – Hit The Road Jack – There is something about her I don’t like. I didn’t like or dislike her performance though, I’m pretty neutral about it.

Bryan – Iris – Probably the best from Team Adam so far, but that’s not saying much.

Amanda – Dream On – Ah I see, Team Adam was saving the best for last. Another great performance.

Terry – Don’t Stop Believing – Terry is definitely one of the front runners in the competition and I think he did great with his performance.

Liz – Independence Day – I wasn’t really in to this performance. She seemed to be pitchy and fall over words at spots.

Cassadee – My Happy Ending – I want to dislike her, but she did a great job on that song.

Michaela – Everybody Talks – I think she is one of my favorites in the competition. If she doesnt make it through something is wrong with the show.

Julio – El Ray – I think he is taking a big risk singing in Spanish, but he has a nice voice.

De’borah – Who Knew – Her performance kept skipping for me, but from what I heard it was good.

Devyn – Bleeding Love – great performance, I was really impressed with it

Sylvia – The One That Got Away – Her piano risk paid off. Hard to pick who will be moving on from this team after that one!

Dez – Wanted – Currently my favorite song in the world, so obviously him making it less country made me love it all the more!

Cody – One More Try – Love cody! Nice performance showing off another side of him.

Mackenzie – What Makes You Beautiful – I really like him, but I don’t like him doing only re-makes of current pop stuff. I’d like to hear something different.

Nicholas – My Everything – He has a really great voice, but I’m not sure his look will get him through with America’s vote.( But I hope Im wrong!)

Trevin – What Am I Supposed To Do Without You – I prefer his performances like this, his higher register is a bit too much for me.

Well, I was consistent with 1 wrong from each team based on my picks, honestly I should have picked Cassadee because she has a fan base already, that slipped my mind.  And I do like Cody but thought the teens would vote for Mackenzie.  Guess not!

Like a true fan girl, after almost every concert I end up with a sore throat from screaming song lyrics for sometimes 2 hours straight.  I’m always looking for something that will help ease the pain in the days after the show when my throat is aching.  After 15 years – Pine Bros. Softish Throat Drops are back!  I was sent Wild Cherry and Honey flavored throat drops to try out.  They are available in refillable pucks – which fit perfectly in your purse. Or your mothers purse should she decide to snatch the Honey ones from you! 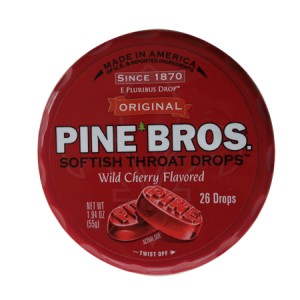 The drops have been a trusted brand since 1870 – soothing America’s throats for over 140 years!   They are softish and chewy – but not so much that I can’t use them with my braces, which is a good thing because I forsee a lot more sore throats coming before the braces are off! (I am going to see One Direction two nights in a row and The Wanted two days in a row one day after that, afterall!)  They are also easy to give to children, but it is recommended to only give them to kids ages 3 and up.  The best part is that each drop is only 5 calories! 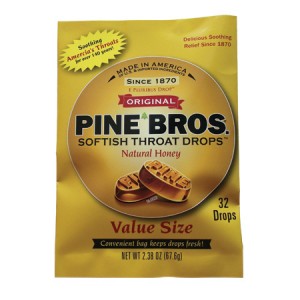 I tried both the Wild Cherry and the Honey flavors (even though my mom stole the Honey ones and says that she LOVES them!)  The flavors are more muted than some other throat drops – but I kind of prefer that. I am using them to help make my throat feel better – not as if they are pieces of candy.  There is no need for them to be out of control sweet.

If you want to try the product for yourself, they are available at CVS Pharmacy.