Book Review: Dr Seuss: The Cat Behind The Hat

November 14, 2012 by ConcertKatie No Comments 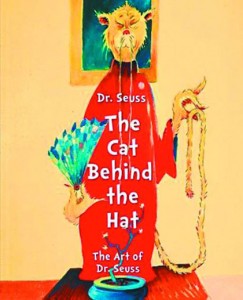 Dr Seuss: The Cat Behind The Hat is about 90% art gallery and 10% biography of Ted Geisel (Dr Seuss).  It shows a lot of his artwork in “chronological-ish” order and at the same time tells a bit about his life during that era.

Did you know that during the war he drew propaganda posters? He also worked on the cartoon “Private Snafu” which I actually remember watching in History class in High School though I don’t remember the teacher mentioning that Dr Suess was involved in it.  I do remember seeing some of his posters over the years though.

There are also artwork and excerpts from some of his books as well.  Oddly enough only 1 of the one mentioned in the book I actually remember reading.  I don’t think I’ve ever read Horton Hears a Who or Oh The Place You’ll Go.  Maybe if I ever catch up on the list of books I have to review, I’ll have to sneak to the library and catch up on my Dr Suess.

Definitely an interesting read and so cool to see so much of his artwork – even sculptures of some of his characters!  Check if out if you are even the least bit interested in art and/or Dr. Suess.

This comprehensive look at the breadth of art that Theodor Geisel created over his lifetime is an eye-opening peek behind the public persona into the real story of the man who was Dr. Seuss.

Illustrator by day, surrealist by night, Ted Geisel created a body of previously little-known work during his leisure hours that he called his “Midnight Paintings,” and which is now known as “The Secret Art of Dr. Seuss.” This irrepressible and soulful collection redefines Ted Geisel as an iconic American artist. For sixty years, his “Secret Art” allowed Geisel to expand his artistic boundaries without the confines and pressures of commercial deadlines and influences. These paintings afforded the peaceful distraction that he craved, and through this work, the tenets of surrealism-surprise and juxtaposition-energized his sensibilities. This volume exuberantly juxtaposes Geisel’s “Midnight Paintings” with his best-loved children’s books because this was how Dr. Seuss constructed his creative life-his days devoted to literature for children, his nights to letting his mind and palette wander to even stranger shores. Inevitably, Geisel created images in his private artworks that would find their way into his literary projects. Though he fiercely protected his “Secret Art” from criticism during his lifetime, his intention all along was for these works to be seen when he was gone. It is downright absurd to make an art book on Dr. Seuss that attempts a straight chronology on the life and work of this multitalented author, illustrator, painter, sculptor, political cartoonist, adman, doodler, practical joker, and Cat Behind the Hat. Chronology is, in this case, an elusive term. His life meanders between so many facets of artistic impulses, with images cross-pollinating over years and even decades, that the chronological line of his life is as dippy and curved as the architectural elements of a house in Who-ville.

Therefore, this book is “chronological-ish.” That is to say, some things come at the right time and some at the wrong time. But just as Dr. Seuss taught us to look at life “through the wrong end of a telescope,” the iconic artwork packed into these pages helps us understand that it isn’t always a straight line from here to there that matters . . . but rather the fun of the journey that really counts. Chapters include: As Early as It GetsDr. Seuss and His Midnight Paintings Very EarlyAdvertising and Editorial Work Pretty EarlyCollection of Unorthodox Taxidermy  Still EarlySecrets of the Deep Less EarlyThe War Years No Longer EarlyThe Post-War Years Later
La Jolla Birdwomen

A Little Later
The Cat Behind the Hat

Even Later
The Grinch

A Smidge Later Than That
Happy Birthday To You!

As Late as it Gets
Oh, the Places You’ll Go!  This book is published by Chase Art Companies and distributed by Andrews McMeel Publishing.