November 9, 2013 by ConcertKatie No Comments 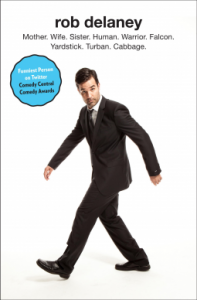 Rob Delaney is a comedian. I don’t know if I even know who he is. But books by comedians are usually pretty good so I figured I’d give it a try and his tagline “Mother. Wife. Sister. Human. Warrior. Falcon. Yardstick. Turban. Cabbage.” made me laugh. Turns out the book, didn’t make me laugh that much.  That’s not to say it wasn’t good, but it told of Rob’s life which was not that easy.  He had some trouble with alcohol which led to him doing some pretty crazy things, but he went to rehab and got his act together and now tries to help others too.  He’s done some crazy shit due to his roommates – like illegally bungee jump off the Manahattan bridge.  He was a bed wetter as a kid and as a (drunk) adult.  Lots of crazy stories in this book, lots of sad-ish stories… but overall a great read – whether you know who the heck Rob is or not.

Rob Delaney is a father, a husband, a comedian, a writer. He is the author of an endless stream of beautiful, insane jokes on Twitter. He is sober. He is sometimes brave. He speaks French. He loves women with abundant pubic hair and saggy naturals. He has bungee jumped off of the Manhattan Bridge. He enjoys antagonizing political figures. He listens to metal while he works out. He likes to fart. He broke into an abandoned mental hospital with his mother. He played Sir Lancelot in Camelot. He has battled depression. He is funny as s***. He cleans up well. He is friends with Margaret Atwood. He is lucky to be alive.

Read these hilarious and heartbreaking true stories and learn how Rob came to be the man he is today.