Book Review: I Am Yours (Heartbeat #3)

November 10, 2013 by ConcertKatie No Comments

I Am Yours is a 3rd book in a trilogy.  I had previously read and reviewed Heartbeat and Come What May.   Both of these books had gotten such a strong response out of me after I finished them that when I saw the 3rd one had been released I knew that I had to read it.  For closure and to see if it continued to have the same effect on me.  And unfortunately, it didn’t.  It definitely gave me the closure I needed though, which was good because I don’t even want to know what would have happened otherwise 😉

This book picks up right where the last one had left off.  Adam meets up with Katie.  And it turns out that Katie had been dreaming about him all this time too.  But Adam was thisclose to being with Jada.  Who does he want?  All the secrets that were supposed to be buried with his brother’s marriage end up coming out and the wedding doesn’t happen.

Then the plot line gets a little nutty and we find out why Katie and Adam have been dreaming about each other.  This all seemed a bit far fetched and while there needed to be some sort of explanation, I didn’t like it.

Adam has a happy ending… but I won’t tell you who he ends up with. You’ll just have to read and find out!

Adam is at a crossroads.
He has Katie on his mind and Jada in his bed.
Now with the ultimate choice before him, he must decide between fantasy and reality.
Katie’s his dream girl, but Jada’s his best friend, his partner. As a paramedic, he’s supposed to save lives, not wreck them. Yet his failure to commit leaves a trail of heartache in his wake.
Things come to a head at his brother’s wedding when a surprise announcement leaves Adam scrambling to pick up the pieces. Sure, women find his shaggy blond hair and aquamarine eyes irresistible. But to him, sex is nothing more than a means of escape … until it turns into a psychological trap.
His mind is telling him one thing, while his heart is beating another. He’s not sure what he wants when it comes to a serious relationship. Sorting out his feelings, he finally comes to a startling realization. He is capable of love.
But what if it’s too late?
Book Review 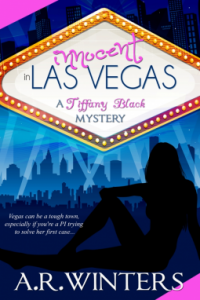 Innocent In Las Vegas is about Tiffany Black – at night she is a blackjack dealer at one of the Las Vegas casinos, but by day she is trying to become a private investigator.  She is hired by Sophia who was married to casino owner Ethan Becker.  Ethan has been murdered and the murder weapon was found in Sophia’s nightstand, but she swears she is innocent.  The cops don’t believe her so she wants Tiffany to help prove it.  While she talks to other potential suspects, things get a little crazy.  She is locked in a room by Beady Eyes and Mr. Beard and after escaping (after stabbing one of them with her stiletto heels!) Sophia hires her a bodyguard named Stone.  Stone believes that Tiffany should go to self defense classes as well as get a gun permit, but Tiffany resists.  When she finds herself in her condo with a masked man who has a gun and she has nothing but a vase, she begins to think maybe Stone is right.  She escapes the masked man unharmed (and hides in a neighbors apartment who gives her cupcakes!) and continues to dig deeper into the investigation even though several people are after her and will back off if she backs off the case.

The book is a quick read with a lot of action, drama and mystery.  Will Tiffany solve the case and prove that Sophia is innocent? Or is Sophia only hiring a private investigator to make her look better to the jury? What else will she uncover about the suspects during her investigation? You’ll have to read Innocent in Las Vegas to find out.

About the Book
Private investigator by day, blackjack dealer by night, and cupcake-addict extraordinaire, Tiffany Black has just landed her first case. Casino owner Ethan Becker has been murdered, and Tiffany needs to find the real killer.

What should have been a simple matter of talking to a few suspects gets out of hand, and soon Tiffany finds herself fielding violent casino goons, a mysterious new bodyguard and strange masked men. Her poker-playing Nanna and pushy parents want Tiffany to settle down and get a nice husband, but Tiffany just wants to stay alive and solve the case, preferably with a few more cupcakes for good luck…