Book Review: The League of Delphi

November 11, 2013 by ConcertKatie No Comments 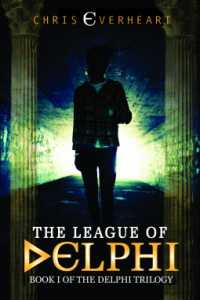 The League of Delphi is Book 1 of The Delphi Trilogy, I also was able to read the second book in the trilogy and look for that review tomorrow!  The book centers around Zach, who has returned to Arcanville, where he had grown up.  Now both of his parents are dead and he returns home with a new name to try and find some answers.  Why couldn’t he go home?  While there he gets a job at a local diner and is able to observe all of the people in the town pretty easily.  Recently, a boy from town, Sutton had committed suicide and you can see the effects of his death throughout the people in the community.

He meets a girl, Ashley, who tells him that there is a secret committee that is running the town but that everyone thinks that she is crazy when she mentions it and she keeps getting put in the psyche ward because of talking about it.  Zach believes Ashley though and is trying to figure out just what exactly is going on.  He believes that the head of police is in charge and that one of the libraries in town – which appears to have no entrance – seems to be their headquarters.

He and Ashley sneak in – and what they uncover is shocking. So much so it could get them killed.  What did they find and will they survive?

I really liked this book.  It had a lot of mystery and a lot of action going on, with some twists and turns I wasn’t really expecting as well.  The town seems to be so perfect and Zach quickly realizes that it is not – with the help of Crazy Larry. I don’t want to give too much away but once I started the book I couldn’t put it down and I am looking forward to reading the second installment!

If you missed Book I of the exciting new Delphi Trilogy, read it now in advance of Book II’s release.

A lone teen, a suspicious death, an ancient conspiracy …

“The League of Delphi, the first book of the gripping new Delphi Trilogy, draws you in, takes you on a tense, thrilling ride, and leaves you wanting more.

Ten years after his father’s mysterious death, 17-year-old Zach secretly returns to his wealthy hometown in search of answers. Why did his mother move him away then go into hiding to die alone? Why did she change his name, forbidding him to ever reveal his true identity? Why was he never allowed to return home?

Left with nothing and no one, Zach is desperate to reconnect with this seemingly “perfect” town. But something isn’t right. When a local teen commits suicide and no one seems to care, Zach’s hopes collapse into disenchantment and suspicion. Ashley, a local teenager on the fringe, piques his interest with whispers of a secret committee controlling the lives of everyone around them. Could it be true? Together, Zach and Ashley delve into the hidden life of the town and discover a dark connection to Ancient Greece and the Oracle at Delphi. Their suspicions are confirmed — but the conspiracy is more terrifying and dangerous than they ever imagined …