Book Review: Come What May

August 8, 2013 by ConcertKatie No Comments 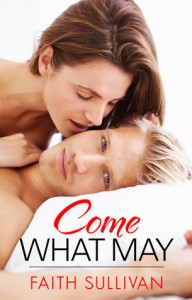 Come What May is the sequel to the book Heartbeat – the book that I had major issues with the ending. I mean, these were major issues.  I was thinking about it for DAYS!  Usually I just kind of “get over” it if I don’t like endings but I don’t know what it was about this one!  So I had to let out a little laugh when I went to read the sequel to see it was dedicated “To readers who were shocked by the ending of HEARTBEAT”, that would be me, for sure!

The book follows Adam, who was in the first story and his new ambulance partner, Jada.  Once again, the chapters alternated between their perspectives so you could see what they both were thinking.  Both were kinda sorta into each other but neither really wanted to do anything  about it since they would have to work together and that would certainly make things awkward.  Both have had some problems in their past that they are trying to overcome and maybe they can help each other overcome them.

Then there is Adam’s brother, Brian.  He is getting married and of course, Adam is the best man.  Jada says that she will go with him when they get the invitation, but between that time and the actual wedding, a lot of stuff goes down between them – like Adam using drugs and drinking before driving an ambulance with Jada a patient and his wife in it and getting in an accident.  Jada is livid he could do such a thing, but Adam wants to keep up appearances and says that Jada has to go with him because his family is expecting her.

Just when it seems like there may have been a turning point in their relationship – Adam meets the maid of honor in his brothers wedding… and the book ends and I wanted to smash my Nook in half.

Fortunately, there is a final book in this trilogy that is coming out in October, so hopefully it will wrap up everything in the series for me. Or maybe it won’t and I’ll just be crazy over this trilogy for the rest of my life…

Adam is through with love.

He unravels blaming himself for what happened with Katie.

His final moments with her echo through his nightmares.

She owns him body and soul.

To dull the pain, Adam invites a string of women into his bed. Fueled by alcohol and desperation, his meaningless hook-ups provide little comfort. When he closes his eyes, it’s Katie he sees.

The only one who helps to ease his guilt somewhat is Jada. But as his new ambulance partner, Adam considers her off limits. He doesn’t want to get seriously involved with anyone, much less her. Yet he can’t stop fantasizing about the feel of her caramel skin against his.

Despite his intentions, Adam’s bond with Jada deepens as they respond to a series of emotional calls. Their mutual attraction becomes undeniable. But how can he give his heart to Jada when it still belongs to Katie?