November 22, 2013 by ConcertKatie No Comments 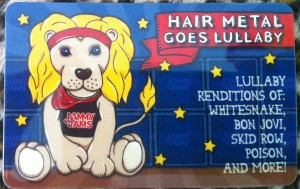 I had previously reviewed the Once Upon a Rhyme compilation, and now Jammy Jams has released their 4th release – “Hair Metal Goes Lullaby”  Jammy Jams elevates lullaby music to a whole new level of awesomeness. Whether you are a child of the 80s or are shopping for a little one born yesterday, these gentle lullabies will captivate and delight. You have to listen to believe that songs originally performed by heavy hitters like Motley Crue or Bon Jovi could be transformed into these incredibly peaceful and comforting arrangements. Like a hug from your best pair of spandex pants, Jammy Jams’ soothing sounds embrace, providing the reassurance needed ofr you or your little dream warrior to slip into a cozy slumber.

It’s never to early to start your kids on the classics of hair metal with Jammy Jams!  With the first CD I wasn’t sure what to expect – with this one that I was reviewing I knew that it would be absolutely amazing and it did not disappoint.  Who knew listening to Bon Jovi could soothe me to sleep?  When I think of Whitesnake Here I Go Again, I don’t really think about going to sleep.  But with the Jammy Jams version? It’s a whole other story.

1. Every Rose Has Its Thorn (originally by Poison)

4. I Remember You (originally by Skid Row)

5. Lay It Down (originally by Ratt)

7. Livin’ On A Prayer (originally by Bon Jovi)

Giveaway! One lucky winner will receive their own Hair Metal Jammy Jams!  Ends 12/6.  Winner will have 48 hours to reply to winning email or another winner will be chosen. 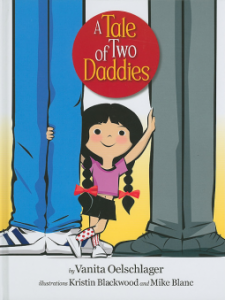 A Tale of Two Daddies is a super adorable book about a girl who has 2 Daddies – Poppa and Daddy.  She is with a boy in the park who has all sorts of questions – which one would build your house in a tree? And which dad helps you when you skin your knee? And the girl answers each one with Poppa, Daddy, Neither or Both!  The book is all in rhyme which makes it even more fun.

I think this is a great book to teach other kids about families that have two daddies – they’re no different than any other family – they still make birthday cakes and give lots of love!

A Tale of Two Daddies is a playground conversation between two children. The boy says he heard that the girl has two dads. The girl says that is right. She has Daddy and Poppa. True to a child’s curiosity, practical questions follow. “Which dad helps when your team needs a coach? / Which dad cooks you eggs and toast?”
To which she answers: “Daddy is my soccer coach. / Poppa cooks me eggs and toast.” It becomes clear that the family bond is unburdened by any cultural discomforts.