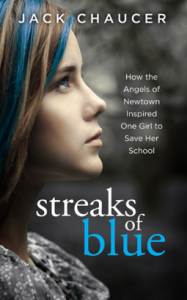 I have a bit of mixed thoughts on this book.  I think the story could be told without all the Newtown connections. (Although half of the proceeds are going to the Newtown Memorial Fund, which is nice.) I think the story being told is important.  Nicole gets told in a dream – by the children of Newtown, that one of the boys in her class is planning something bad.  Nicole makes it her mission to befriend Adam and try to stop what is going to happen.  Meanwhile, she tells only her best friend about the dream who is now incredibly paranoid and hides in the bathroom at 12:14 every day because that was the time Nikki saw in her dream. (12/14 was when the Newtown shooting occurred)  In her effort to be friends with Adam, both of them get detention.  While in detention, Adam gives Nikki a sugar cube laced with LSD and the two end up suspended.  Nikki seems to be in a downward spiral, while Adam’s father is happy that he is spending time with Nikki because she could be a good influence on him.

Her plan seems to work and Adam does seem to not want to go through with his plan, but what will his buddy Thomas “Lee” Harvey think about it all?  He hates that his buddy is hanging out with “Dead Girl Walking”.  I won’t give away what ends up happening in case you want to read it.  Newtown connections aside (I think living in Connecticut it is a bit “too soon” for that type of thing, my opinion of course) it was a nice book about how a friendship can change the course of a person and I think in high school that is important.  There is another boy who gets picked on who has CP (like me) and Adam and Nikki trying to defend him is what lands them in Detention in the first place.  It would be nice if people could be nice to each other ALL the time – instead of in the days, weeks or months after a tragedy happens.  Then maybe these horrible happenings wouldn’t be so common.

Adam Upton and Thomas “Lee” Harvey are plotting the next big school massacre at their New Hampshire high school. Nicole Janicek, who knew Adam in elementary school, tries to reconnect with the damaged teen at the start of their senior year. But will Nicole’s attempt to befriend the would-be killer disrupt the plot and turn Adam’s life around before the clock strikes 12:14?