Book Review: Stay With Me

October 30, 2013 by ConcertKatie No Comments 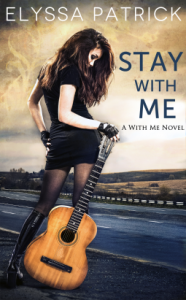 Stay With Me is the story of Hailey Bloom.  She is an ex-actress/pop star who has decided to leave Hollywood and go to college in Vermont, cutting off all of her Hollywood ties – including her stage mother.  She doesn’t really want to deal with a relationship since this is her first time really going to school but she ends up meeting a guy named Caleb Fox and she seems to fall for him and can’t seem to escape him – either in real life or in her mind.

The whole book she eludes to the fact that she has this big secret and when anyone finds out she will be over and done with.  With Caleb and Hailey’s relationship advancing rather quickly, I thought for sure when this secret came out it would absolutely rock their world and make a huge impact.  Hailey seemed to think the same – but when Caleb found out – he was pretty much ok with it.

And then they lived Happily Ever After.  Well, maybe.  There are still a few more books to come too!

New Adult/Contemporary Romance – recommended for ages 17 and up.

With one kiss, it changes everything between us . . .

I’ve been famous since I can remember. Singing, acting, dancing—I’ve done it all. The tabloids cover my every move, but I don’t want that anymore. I want to be normal, whatever that is.

When I leave Hollywood for college in Vermont, I’m on my own for the first time in my life. This is my chance to figure out who I am and what I want in life.

But it’s a lot harder than I expected. I can’t escape my image. Classes are difficult, and I’m struggling. And then there’s Caleb Fox.

Caleb is the one man who doesn’t want to use me. He breaks down my walls. He challenges me. He wants me. And I just don’t know if I can give him the same—or if he’ll stick around when he finds out my shameful secret that the tabloids haven’t managed to uncover.

Dating him is risky enough, but loving him could break me.