Book Review: Hope In Front Of Me

October 4, 2013 by ConcertKatie No Comments 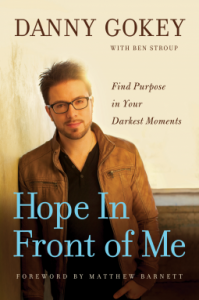 Hope in Front Of Me is by American Idol contestant, Danny Gokey.  It talks about his life and his first wife – Sophia – who passed away just before he auditioned for American Idol’s 8th season.  I was expecting this book to have a bit more about his Idol experience, but I guess in the grand scheme of things, that wasn’t as important in Danny’s life as the rest of his story and he really only talks about it for a chapter.

The book starts with the story of how he met Sophia and their early relationship.  They started dating when they were in their mid-teens and it was a bit on and off.  In their early twenties they got back together and realized that they were meant to be together.  They were married only for about a year when issues with Sophia’s health started up again.  She died after they were married for 4 years after a surgery.  Danny had to make the decision to take her off an artificial heart, and I can only imagine how difficult that was for him.  Shortly after he auditioned for Idol and started his foundation – Sophia’s Heart.  Even though Sophia was no longer living, he wanted her love and her heart to live on through the foundation.  Something I thought was sweet was Danny mentioned that someone donated $2,000 to each of the Top 10 Idol contestants charities of their choice.  Michael Sarver and Kris Allen both chose Sophia’s Heart even though at that point in time it was in the very beginning stages.

After recording an album, touring, being dropped by the record label, Danny still tried to balance making this foundation a reality and helping others.  He was able to get a facility to take in homeless families and the foundation continues to grow.  Danny could have just decided to crawl into a ball and remove himself from life after Sophia’s death, but he really tried to find the silver lining and I think in helping others he also helped himself through the mourning process.

He also talks about meeting his new wife and how many people didn’t seem to like the idea of him getting married again – but he knew that this was the path he was supposed to be following and he talks a bit about his son Danny and how being a parent changed him.

I had known a bit of his story from watching Idol as well as seeing him in concert when he talked about a few of the things he mentions in the book.  But the book really expands on everything and was very interesting and moving. The things he has overcome is amazing and that he is helping so many others is wonderful as well.

Stepping onto the American Idol™ stage just weeks after his first wife’s unexpected death, Danny Gokey experienced both the pinnacle of hope and the depth of despair. But his story began long before that. Danny’s dreams began to form when he was a child, only to take a turn he never could have predicted. As life unfolded, he learned that true purpose is found in relationships, and destiny is sometimes born out of our darkest moments.
Now Danny wants you to embrace that same promise of hope. In this book, he shares his experiences in the high and low moments and offers compelling, hard-won wisdom to help you reach beyond your greatest challenges. Whether you struggle with relationships, loss, anger, self-esteem, or doubt that your dreams can come true, Danny’s down-to-earth encouragement and positive outlook will transform your life and reveal how you can move toward hope and take the next step to truly making a difference.