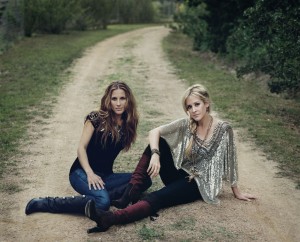 After a few years away from the limelight and the Dixie Chicks, sisters Emily Robinson and Martie Maguire were ready to get back in the studio with the creation of Court Yard Hounds.  Amelita, out now, marks the Court Yard Hounds’ second album.  “We’re a band, not a side project. We like our sound, and we’re going to continue to do this, and share something new this time around.” Emily couldn’t be more clear about the game plan for the Court Yard Hounds the group she and her sister head up.  Containing 11 new tracks, Robinson and Maguire took a different approach with Amelita than their debut album in 2010. This album contains a new perspective, which is due in part to the time passed since Robinson’s divorce. “I’ve been freed of all of those time-heals-everything kind of things,” says Robinson. “Now, I’ve opened up to other ideas and ways of looking at life and the world. I think it’s not only a more hopeful album, but it’s more… well fun.”  The Court Yard Hounds’ new album is a clear statement of who the girls are as artists, defining their sound as a band, with soaring songs that are personal, yet familiar and widely relatable. “I love this band… the way we explore new aspects of ourselves and what we can expect from each other, both musically and as people,” says Martie. “We are close. Plus, being on the road and being in the studio is like my spa from the everyday challenges of just being a mom.”

I think my favorite song from the album is the lead track, Sunshine.  It comes across as a happy track but if you pay attention to the lyrics it is about someone who “always finds a way to bring me down when I feel fine” and puts a negative spin on everything – so they call this person “Sunshine”.  Other favorites include The World Smiles, Rock All Night, and Watch Your Step.  I never really followed the Dixie Chicks when they were big but I did know that Emily and Martie had started a new group.  I didn’t really follow or pay attention to them, but Amelita is a solid album.  After a couple of listens, there aren’t any songs that I would skip (although that may change with a few more listens) and there are a few songs that I am enjoying much, much more than I ever would have expected with a country album. (I know, I know, I have to stop saying I don’t like country one of these days!) 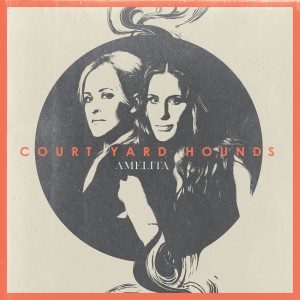 The June 2013 Goodies.co box was an interesting mix of items. 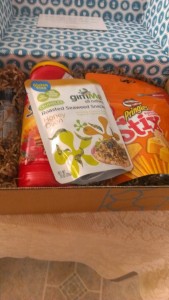 Enjoy an exclusive taste of potato chips with Mexican flair. They’re best sellers south of the border! Qué rico (how delicious), no?
These chips were from Lays, but kind of reminded me of pringles.  The flavor was not as strong as I was expecting, but does become a bit over powering after a handful of chips.  The packaging is unique, but it is hard to reach your hand into and we think that it led to the chips being cracked.

Crumbles of salty roasted seaweed with the sweet zing of honey mustard. Who knew the healthiest vegetable on the planet could taste so good?
It took a while to wrap our head around eating Seaweed.  We were sitting around and my mom went “Hey Katie! Can I try some of that seaweed?” And she was so excited about it.  My Dad started cracking up because he thought she was going to say something like “chocolate”.  Honey Dijon is one of my favorite flavors so that was definitely a great pick.  We tried it just as a snack and it had a kind of nasty after taste but agreed it would probably go better in soup or a salad but have yet to get around to trying it that way.

Eat this right from the squeeze-pouch to enjoy 100% natural tropical fruit puree with chia. It’s healthy, fun and convenient!
This recommends that you eat it from the squeeze-pouch but I had the grand idea to squeeze it out.  Bad idea!  It smelled really good, tasted as good as it smelled (although the seeds in it I didn’t particularly care for) but it did not look good at all.  Next time I’ll stick to their suggestion on how to eat it!

Enjoy a shot of this subtly citrusy Dream Water and you’ll sleep soundly tonight. Rest easy knowing it’s drug free, made with natural ingredients.
I’m a bit nervous to try this so I haven’t yet.

Crisp, crumbly and comforting, these shortbread cookies taste of pure goodness thanks to top-notch ingredients and an age-old Scottish recipe.
Boy do I love me some Shortbread so it was no surprised that I tried these cookies FIRST!  There were 2 in the package and they were certainly delicious.  A great snack coming in at only 110 or so calories for the two, I may have to stash a box of these at work (and hope I can limit myself to only 2 a day as my snack!)

Thin, crisp and buttery breadsticks coated in cheddar cheesy goodness. Pringles Stix are rich, totally unique and fun to munch!
These are great. The rest of the family said they smelled and tasted fake, but I had no problem snacking on them! The back was also resealable which is a big plus.