July 2, 2013 by ConcertKatie No Comments 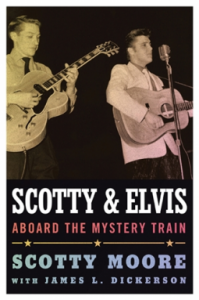 Scotty Moore was Elvis’ original guitarist.  Scotty & Elvis tells the story of Scotty, who you may not know too much about.  Well, Scotty, with the help of James L. Dickerson has written this book so that you will know all about him.  It’s been a while since I’ve read an autobiography and it is very refreshing.  At least then you know at least the stories are true, or at least as true as the memory will allow.

The summer of 1955 was when Scotty hit the road with Elvis.  I can’t even imagine what that must have been like – even after reading Scotty’s recollection of it.  Scotty also became Elvis’ manager, and if you are a fan of Elvis you know that later on he was managed by Colonel Tom Parker.  Colonel Tom pushed Scotty out – as manager and as guitarist and it was not until many years later that the two were reunited.

Definitely an interesting look at Elvis from someone who was there with him in the early days when Elvis was a teen.  There are also some photos included in the book which are always my favorite thing in biographies and autobiographies.  I’m not sure what it is, but that just makes the story so much more real for me.  (One of the photos is even the original management contract between Scotty & Elvis! As well as a letter from Vernon Presley about Scotty’s resignation and final wages.  Really cool.

When Elvis Presley first showed up at Sam Phillips’s Memphis-based Sun Records studio, he was a shy teenager in search of a sound. Phillips invited a local guitarist named Scotty Moore to stand in. Scotty listened carefully to the young singer and immediately realized that Elvis had something special. Along with bass player Bill Black, the trio recorded an old blues number called “That’s All Right, Mama.” It turned out to be Elvis’s first single and the defining record of his early style, with a trilling guitar hook that swirled country and blues together and minted a sound with unforgettable appeal.

Its success launched a whirlwind of touring, radio appearances, and Elvis’s first break into movies. Scotty was there every step of the way as both guitarist and manager, until Elvis’s new manager, Colonel Tom Parker, pushed him out. Scotty and Elvis would not perform together again until the classic 1968 “comeback” television special. Scotty never saw Elvis after that.

With both Bill Black and Elvis gone, Scotty Moore is the only one left to tell the story of how Elvis and Scotty transformed popular music and how Scotty created the sound that became a prototype for so many rock guitarists to follow. Thoroughly updated, this edition delivers guitarist Scotty Moore’s story as never before.

Scotty Moore, Nashville, Tennessee, is the sole survivor of the Sun Records sessions of July 1954 during which Elvis Presley, Bill Black, and Scotty Moore, with Sam Phillips at the engineering sound board, blended country and blues into a new art form that would shake up American culture for decades to come. James L. Dickerson, Jackson, Mississippi, is a freelance author and journalist who has published dozens of books.