July 6, 2013 by ConcertKatie No Comments 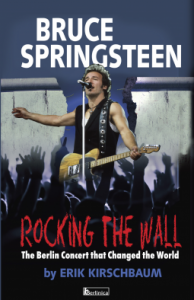 Rocking The Wall is a book devoted to essentially, one Bruce Springsteen show that took place in East Berlin on my 4th birthday – July 19, 1988.  This was a big deal because it was about a year and a half before the Berlin wall came down.  Part European history, part Rock N Roll history – Rocking the Wall is certainly an interesting read.  While I obviously was alive while this was going on, I don’t really remember much of this conflict and I have to say, if history class put a bit more of a rock n roll spin on it, I probably would have paid more attention.

Certainly an interesting read and I would recommend it to history buffs and Bruce fans alike.

Rocking the Wall explores the epic Bruce Springsteen concert in East Berlin on July 19, 1988, and how it changed the world. Erik Kirschbaum spoke to scores of fans and concert organizers on both sides of the Berlin Wall, including Jon Landau, Springsteen’s long-time friend and manager and he unearths lively behind-the-scenes details from eyewitness accounts, newspaper clippings, TV recordings, and even Stasi files, as well as photos and memorabilia. This book transports you back in the middle of those times shortly before the Berlin Wall fell and gives you a front-row spot at one of the biggest and most exciting rock concerts ever, anywhere. It takes you to a journey with Springsteen through the divided city, to his hotel, and his dressing room at the open air concert grounds in Weissensee, where The Boss, live on stage, delivered a courageous speech against the Wall to a record-breaking crowd of more than 300,000 delirious young East Germans. Their tremendous, powerful cry for freedom became the “final nail in the coffin” of the Communist regime and subsequently helped fuel the uprising that brought down the Wall.