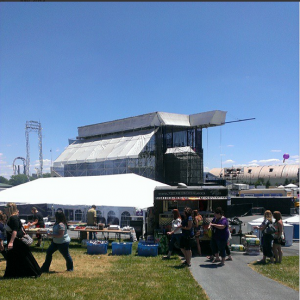 For Day 1 of Mixtape Festival we did Silver VIP because it was HANSON day.  At 1pm we were treated to a “meet and mingle” BBQ where we were told some of the artists might show up.  In hopes that Hanson would be there, we were ready to go at 1.  We got our food, which was really good and ate it and then just kind of hung out because Hanson’s acoustic performance wasn’t until 3:00.

One of the photographers came by and said that One Republic, Hanson and Gavin DeGraw would be coming out before 3 to see us.  We heard the photographers talking and they were going to do candid shots and shots of us as a table w/ the artists.  The first to arrive were One Republic and The Script. They had them start on opposite sides of the picnic tables so we got The Script s the 2nd table. They all came around and shook everyone’s hand and were super nice.  It was REALLY hot and they all had on long pants and were just not dressed for the temps and they said that they were told it was going to be inside and Danny said “I’m melting like a snowman in hell!” (which he later said on stage too lol)

Then Hanson came and I kind of waved and Zac came over so they started with our table.  It seriously felt like we talked to them FOR-EV-ER.  I had the chance to get my CD cover signed (and a “fight” with Zac over using his black pen to sign the inside white pages or use my silver pen to sign the cover!) by all 3 of them, chatted with them about BBQ, Rollercoasters and tour which led into a chat about setlist databases which is actually what I’ve been coding for my hanson fan site (hansonstage.com) for the past year or so, so I got to tell Isaac about that!  Then we did our table photo (really can’t wait to see the 2 photos!!) and they made their way around.

We decided we’d rather get a spot in the VIP tent for the acoustic Hanson performance than hang around for One Republic or Gavin (who I think did eventually make his way out there) and got a spot on the barricade (it was separated for Gold and Silver VIP) and they did 6 or 7 songs.

We hung out in the VIP tent for a while and headed over when Serena Ryder had already taken the stage.  I liked how she mentioned who she was after almost every song because she knew that people were still filing in to the stadium.  It always makes me crazy when people NEVER say who they are!  She has a new album coming out soon and had a lot of really fun songs!

Then it was time for Hanson! Taylor seemed to be running around the stage a bit more than usual – which was a plus.  They had a pretty solid setlist too.  The only downside was where our seats were, Taylor was blocking Zac for most of the show.  I got super excited when Zac came over to the keys to play Juliet… but a photographer decided that she REALLY, REALLY wanted to get my photo and was taking pics of me nearly the whole song which was super awkward. I don’t even remember what outlet she was with so if you see me out there somewhere… let me know lol

Gavin DeGraw was up next and he always puts on a great show. He has such great stage presence.  I did snap a photo of his setlist before he started but it’s been such a hectic (but fun!) weekend, I didnt have time to upload any photos yet so that info is still-to-come.  He had Ryan from One Republic come out and sing a song with him too.

Next up was The Script who I was excited to see because they were the only act from the day that I had not yet saw!  Danny was absolutely nuts going in the crowd, running all over the stage, climbing over all sorts of things and I loved it. He tried to make everyone feel closer by going in the stands which was awesome. (Gavin went in the crowd as well.) I also snapped a pic of their setlist so that is coming at some point as well!

Then it was time for One Republic. It is crazy how many freaking hits they have and how they can make nearly an entire setlist out of them (and probably then some!) Ryan said that he, Danny and Gavin (who are all on tour together) have all been having throat issues and 2 days ago he had no voice at all so he’d be drinking tea throughout the show.  He teased that they all hired the guy who worked with Milli Vinilli for their recorded tracks and then made it sound like his track was skipping!

Then it was time for the headliners, Train, who I was least excited to see.  We made a deal to stay for 3 songs and then head into the VIP Tent for the afterparty that Hanson was hosting.  The VIP tent had a feed piped in of the show so we did get to see most of it and I was not too happy with our decision to leave when Train brought up EVERYONE from the day to sing “The Weight” and Zac was right by where our seats were! Oh well, live and learn – we’d not be leaving early night 2 !

The after party was interesting.  Zac came out and danced around which really got everyone going nuts.  Then Taylor came out to do a guest DJ set and unfortunately it seemed to really fall flat.  Everyone stopped dancing, no one knew what he was playing and in order to try and redeem him, Zac came back and then actually went dancing through the crowd and seriously had to have danced with everyone there (yes, even us!)  It was great!  Ryan Tedder came in for a while and then one of the guys from MKTO (i think?) came in and when it seemed like Hanson was done for the night we decided we were too since we had to be back early for broom ball!