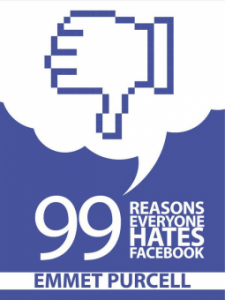 If you have a Facebook then there are no doubt things that your “friends” on there do that drive you NUTS.  If not, you are a robot and not a human.  There are 99 different things in this book that someone that you are friends with on facebook can do that will annoy you – or make you hate facebook.

For example – Sideways Photos! (And the author’s comments on this reason are sideways too. argh.)

The author’s commentary on each of the reasons had me L-O-Ling (but not for real.)

Am I guilty of any of these 99 reasons? Probably.  There were a couple that I am pretty sure I fall under and I am sure there are plenty more that my “friends” would say I fall under that I may disagree with. (And I’m sure I can put these “friends” into categories that they will deny they belong in as well.)

Honestly, I could probably write my own book in response to the things in this book, but I will spare you. (And my family will be the ones to suffer with my rants over idiots on Facebook and how I should go back to not allowing anyone over 40 to “be my friend”)

Anyway – if you have a facebook and the people that you have on it sometimes piss you off (and I am saying this has to be EVERYONE or else you don’t have very many “friends”) then you should read this book.  If all 99 reasons don’t give you a laugh, probably 50 will and that is good enough.

Writer Emmet Purcell is a simple man with simple tastes. He likes keeping things short and simple, which is why Facebook appealed to him when it first surfaced.  However, as it inevitably transformed from being a well-loved social outlet for friends and family into an egotistical, duck pose-laden, virtual farming-centric nightmare, he decided to take a humorous tongue-in-cheek ‘poke’ at the social website in his new release 99 Reasons Everyone Hates Facebook.

“With over one billion worldwide users, Facebook has become a part of our social identity…for good or ill. Mostly ill,” says Purcell.  “But rather than wag a disapproving finger at the website itself, I decided to point out such inanities as creating a Facebook page for your pets, giving out WAY too much personal information, Face-Bragging and being one of the 48,000 people who have been suckered into clicking on ‘Join if you love your dad/mom/Jesus.”

99 Reasons Everyone Hates Facebook consists of nine chapters that contain 10-12 ‘Reasons’ each, with each chapter focusing on some of the biggest Facebook offenders around. For example:

Reason #1 – Huge numbers of people gather together on Facebook to form the most pointless of groupsReason #23 – Posting song lyrics as a status messageReason #33 – Spending real money on virtual goodsReason #64 – The plight of Facebook’s only other Mark ZuckerbergReason #70 – Facebook was mean to a really, really old womanReason #95 – Don’t like Timeline? Tough luck