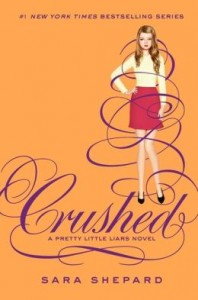 Crushed is the 13th book in the Pretty Little Liars series.  I am wondering if this series is ever going to end.  In this book it is almost time for prom and A is still tormenting our Pretty Little Liars.  Always one step ahead of the girls, they try anything they can think of to try and throw her off their tails.  They hide in panic rooms,  get untraceable phones but as always A knows all.  They make a list of who might be A and one of the people on the list is quite close to Aria.  Meanwhile they are being questioned by police about things that happened while they were vacationing in Jamaica and Iceland. (How do these girls afford all these trips?!)

Will we get any closer to figuring out who A is? Yes and no. Of course.  There always has to be a set up for the next book 😉  I generally dislike reading these books while the show is on because it is 2 different worlds – the show has taken in one direction and the books in another and some characters are dead or non existant in one version and not the other, but I had to read this one after the new season picked up because that’s just how it worked out in my schedule.  I do really love the books and they are quick and easy reads – they can easily be knocked out in less than a day but once they are over you want to read the next one right away and I’m not even sure if it’s begun being written yet!

I was not asked to write this review, I purchased the book to read on my own time and posted the review because I thought it was something that would interest my readers.

In the thirteenth Pretty Little Liars novel, the secrets are more crushing than ever. . . .

It’s springtime in Rosewood, but while everyone else is searching for the perfect prom dress, Hanna, Spencer, Emily, and Aria are on a different kind of hunt: They’re looking for A. . . .

Hanna puts her campaign for prom queen on the back burner to volunteer at a burn clinic, where one of A’s victims is recovering. Emily digs into Ali’s past at the mental hospital with some very crazy consequences. Spencer contacts an amateur private eye to help her stalk her stalker. But when their sessions get a little too private, they may forget to keep their eyes on A. And Aria’s worried that A is even closer than she thought. When her dark secret from Iceland comes to light, she discovers that maybe, just maybe, the one person she’s been trying to hide the truth from has known all along.

The liars are finally taking the fight to A. But no matter what they do, A’s always one step ahead, ready to crush the girls completely.