July 5, 2013 by ConcertKatie No Comments 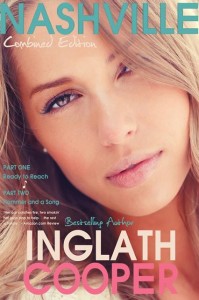 Nashville is the story of CeCe Mackenzie who leaves her home in Virginia to head to Nashville to pursue a music career.  On the way there, in her old car Gertrude, she finds herself in trouble with her car on fire.  She is rescued by 2 guys also heading to Nashville – Holden and Thomas.  From this point on, the chapters alternate from the perspective of CeCe to the perspective of Holden.  Thomas is not too keen on the idea of CeCe tagging along, but Holden convinces him.  They end up finding out CeCe’s Uncle was a famous musician and that she really can sing and she ends up joining them for gigs and living with them until she can get back on her feet.

Holden and CeCe are falling for each other, but Holden has a girlfriend Sarah – who shows up one day to visit just as things seem to be heating up between CeCe and Holden.  A strange turn of events finds the 4 of them in a music group with quite an opportunity but things are tense between Sarah, Holden and CeCe.

CeCe ends up going out with a country music stars son and Holden is up all night worrying. Sarah ends up leaving and Holden things that now he and CeCe can be together, until they find something in his bedroom that shocked them both.

I really liked this book it was a quick read and I was very interested in these characters and what was going to happen to them.  The book kind of ended abruptly but I think that is just because Part 3 is not available yet and I am now very anxious to read it to find out what happens! I actually let out a yell when it ended and I had nothing more to read or find out!

Nashville – Part One – Ready to Reach Nineteen-year old CeCe Mackenzie leaves Virginia for Nashville with not much more to her name than a guitar, a Walker Hound named Hank Junior and an old car she’d inherited from her grandma called Gertrude. But Gertrude ends up on the side of I-40 in flames, and Nashville has never seemed farther away. Help arrives in the form of two Georgia football players headed for the Nashville dream as well. When Holden Ashford and Thomas Franklin stop to offer CeCe and Hank Junior a ride, fate may just give a nod to serendipity and meant to be. Nashville – Part Two – Hammer and a Song CeCe McKenzie grew up dreaming of a life doing what she loves – singing in Nashville. When she and her Hound dog Hank Junior set out to make her dream come true, life takes some twists she hadn’t counted on. Like falling for Holden Ashford, a songwriter with a gift. And also a girlfriend. Can a country music star’s hunky son help her forget about Holden? Or is that even possible when her heart insists on writing the song?