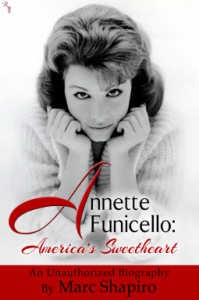 America’s Sweetheart is the story of Annette Funicello – one of the most famous mouseketeers. (Should I say original mouseketeers?)  I really didn’t know too much about her – I knew she was on MMC I knew that she was an actress and I knew that she had MS and passed away earlier this year.  Now that I’ve read this biography I know a lot more.  I starts with how her parents met – a really cute story – her dad told his friend that he was going to marry that girl.  Turns out that girl was his friends sister and he teased him about it.  But it turned out that her dad was right and he did marry that girl and they had Annette and then 2 boys – Joey and Michael.

Annette was shy but her teacher realized that she had rhythm so Annette started playing drums at an early age.  She also auditioned for the Mickey Mouse Club and for some reason became Walt Disney himself’s favorite even though many others on set did not think she would make it from the blue team b squad to the red team a squad.  She did and then had several spin offs and other acting jobs – doing many beach movies with her dear friend Frankie Avalon.  She even had a singing career – despite constantly telling people that she could not sing.  Her records kept charting for a while though, so she continued to live out the  fantasy.

The book is really interesting and focuses a bit on how difficult her life was – especially once she had taken off as a star and was not home with her family and her mother traveled with her quite a bit as her guardian.  She was sheltered and went from her parent’s house to her husband’s house which caused added pressure – on top of always being in the spotlight.

Ultimately Annette was quite a fighter and was hopeful that there would be a cure for MS.  We can only hope that one day there will be so others won’t have to suffer like she did. (Even though she fought the disease all the way.)

If you are looking to find out more about Annette – be sure to check out Annette Funicello: America’s Sweetheart.  The back of the book also features her discography and filmography if you want to check out all that she did in her career (it’s a lot!)

Annette Funicello was the “it girl” of a much more innocent time.

As a member of Disney’s Mouseketeers in the classic children’s television show The Mickey Mouse Club, as a pop singing star of non-threatening or controversial pop music, and helping to usher in a new era of teen-friendly movie high jinks with the Beach Party movies, Annette literally defined four decades of pop culture during her time in the spotlight.

But it was not always an easy ride.

Annette would be the first to admit that she had grown up “a sheltered child.” Consequently when reality did strike, she was not always up to the task of dealing with it.

Annette Funicello: America’s Sweetheart looks at the life and career of Annette from all angles, all sides, the ups and downs. Stories that are supported by exclusive interviews with fellow performers Carl Gardner (of the group The Coasters), Freddy ‘Boom Boom’ Cannon, Tommy Sands and songwriter Richard Sherman. Annette has told her story before. But it has never been told this way.

Marc Shapiro is the NY Times best-selling author of We Love Jenni – An Unauthorized Biography, The Secret Life of EL James, Who is Katie Holmes?, An Unauthorized Biography, Legally Bieber: Justin Bieber at 18, J.K. Rowling: The Wizard Behind Harry Potter, and Justin Bieber: The Fever! and many other best-selling celebrity biographies. He has been a free-lance entertainment journalist for more than twenty-five years, covering film, television, and music for a number of national and international newspapers and magazines.