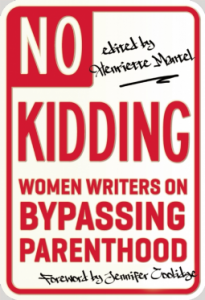 No Kidding is a group of essays from women who don’t want children.  There are some names you might recognize – like Margaret Cho – and all share their experiences and why they ultimately decided that having kids was not for them.  This is a topic that has been coming up amongst my friends a lot recently, so I figured I would check it out.  All of the women have different reasons as to why they don’t want to be a parent.  Some had several miscarriages and decided that being a mom was not for them, others have a significant other with children and that keeps them content and others have known since a very young age that having kids and being a mom was just not something that they were in to.

I received a free e-copy of this book to write this review I was not otherwise compensated.

In  No Kidding, comedy writer Henriette Mantel tackles the topic of actually not having kids. This fascinating collection features a star-studded group of contributors—including Margaret Cho, Wendy Liebman, Laurie Graff, and other accomplished, funny women—writing about why they opted out of motherhood. Whether their reasons have to do with courage, apathy, monetary considerations, health issues, or something else entirely, the essays featured in the pages of No Kidding honestly (and humorously) delve into the minds of women who have chosen what they would call a more sane path.

Hilarious, compelling, and inspiring, No Kidding reveals a perspective that has too long been hidden, shamed, and silenced—and celebrates an entire population of women who have decided that kids are just not right for them.