At first I was not going to be going to the first night of the package tour – because it was added last.  I bought tickets for what was supposed to be the first night, they added another night before that, so I bought tickets to that and then they added another. Fed up (and having spent FAR too much on VIP packages for the other 2 nights) I decided not to do it.  Then I won tickets from Mohegan Sun with a twitter contest.  They were very close to the last row in the arena, if not the last row.  Fortunately my friends won seats IN THE BARRICADE and gave me an extra ticket in the 3rd row and it was amazing.  Tonight I have 5* front row VIP with a NKOTB M&G and then Friday night I have regular seats (which are going to be so bad compared to the first 2 nights lol) and a VIP Package with 98 degrees.

The stage set up is interesting.  There is what typically would be the “main stage” but for this tour it is the secondary stage. (“Stage” in the above photo)  So all the seats that would be facing the front are actually facing the back where the main, let’s call it “flower stage” is.  I would assume the numbers actually went backwards as well (so 1st would be closer to the flower stage) but I am not totally sure.  Where it looks like 4 and 5 in the photo above would be sideways, it wasn’t.  2, 3, 6, 7 equivalents last night were 3 rows. (I was in the equivalent of 6/7)

There are 5 “petals” that come off the flower stage. In between those petals are the inside the barricade seats.  These ran for $1k through VIP Nation but I know NKOTB gave away a few on twitter yesterday and I think they upgraded some other VIP ticket buyers as well.  The sections were N, K, O, T and B.  If you are standing on the secondary stage looking at the main stage, N was to the left and went around so B would be on your right.

All the info we got for VIP stated that 98 Degrees would be on at 7:30, Boyz II Men at 8:30 and NKOTB at 9:30.  The show started late, I think around 7:45 and when I looked at the secondary stage – there was Boyz II Men.  In the early info for the tour everyone was saying BIIM would be first, and I think I preferred this line up, but it was a bit of a surprise.  After their set I sat down for about 3 seconds before 98 Degrees took the stage! I was hoping to have time to post the setlist but I barely had time to correct the typos from autocorrect!

Boyz II Men’s set seemed really short – but they basically did all of their hits and ended it with Motownphilly, which I thought was perfect since most of their other stuff is ballads.  They also gave out roses to girls in the crowd. I didn’t catch one.  Maybe tonight?  98 Degrees set seemed really long. It was about half stuff from 2.0 and I felt like a lot of it fell flat.  They were trying to get people to sing along – but no one knew what to sing.  It will be interesting to see if they mix up their set a little bit tonight or not.  I think they have a couple other “hits” they can throw in there.  I don’t even have the new album yet so I was lost for most of the new stuff. (I am hopefully buying it tonight because they are doing a CD signing. Assuming I can get up there early enough to get a wristband for the signing)

Photos at some point in the near future from all the shows… it’s a busy week.

Just got back from night 1 of The Package Tour! It was so much fun and I will (hopefully) post more about it tomorrow. But until then – here is the setlist – I think.

And here is some more babble just to make sure that it doesn’t come up in the twitter text just in case….

Tomorrow I do it all again so if anything changes up (I felt like a few songs didnt go over so well in 98’s set) I’ll try to take note! 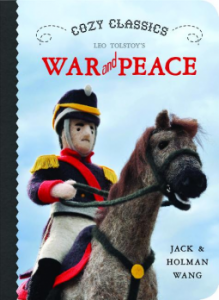 I absolutely love these Cozy Classics. Especially when they are books that I haven’t read yet.  The book is only 13 pages long and is made up of felt characters that are relevant to the classic story that is being re-told.

War and Peace is not a book I’ve read and it’s not one I would probably think about reading (it’s really long, isn’t it?) but now I’ve got the jist of it in 12 words and 12 pages.  Love these cozy classics! They are so creative and clever.

I received a free e-copy of this book from the publisher through NetGalley I was not otherwise compensated.

Give a kid a classic! Cozy Classics is the popular board book series that presents well-loved stories to children aged 0+ through twelve child-friendly words and twelve needle-felted illustrations. War and Peace is Leo Tolstoy’s epic masterpiece about love and friendship in aristocratic Russia during the country’s struggle against Napoleon, and is often considered the greatest novel of all time. Now you can share this classic with children of any age.