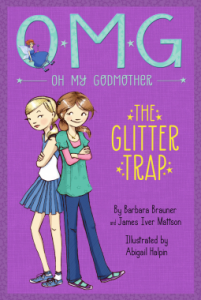 OMG – The Glitter Trap is a story about Lacey, who after delivering food to one of he popular girls in school, ends up somehow stealing her fairy godmother when she set a “glitter trap”.  The fairies are attracted to glitter and Paige had made a sign with a lot of glue and glitter – which ended up in Lacey’s hair.  If you steal someone’s fairy godmother and her dreams don’t come true, your dreams won’t come true either.  This bothers Lacey because she is up to be the intern at the local Zoo.

Katarina (the fairy) gets hurt in the transport from Paige to Lacey’s and she can’t use her wand so Lacey has to try and take over as Paige’s fairy god mother.  Meanwhile, she finds herself lying to her best friend Sunny, who thinks she cares about Paige more than her.

Can they work it all out and get Paige the lead in the play and Lacey the internship at the zoo?  Will Lacey figure out how to do magic with Katarina’s wand?

I thought that this book was really cute , even though it is geared more for Middle School readers.  I also liked how the fairy godmother theme worked through the book – as the dream Paige wanted was the lead in the play at school – which was Cinderella.  I also liked all the trouble Lacey got in to when she was trying to do the magic.  It was a fun read and a quick and easy read for your pre-teen girl.

Middle school is far from a fairytale for adorkable misfit Lacey Unger-Ware. When Lacey ends up with popular girl Paige Harrington’s smart-mouthed fairy godmother, Katarina, trapped in her hair, life gets more magical—just not in a ‘prince charming’ kind of way.

Katarina’s wings are too damaged to continue her fairy duties, and Lacey must take over as Paige’s fairy godmother. Distracted by her new responsibilities, Lacey’s in danger of losing her best friend, Sunny. Can Lacey get the hang of magic, make Paige’s dreams come true, and survive middle school?

Barbara Brauner and James Iver Mattson’s debut novel is full of heart and charm. Get ready for the Oh My Godmother series to cast a spell on tween girls!