Book Review: Who is Katie Holmes? 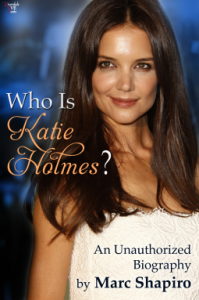 Who Is Katie Holmes is an unauthorized biography on the actress.  Most of the information in the book I knew, as most of it was taken from tabloids and other magazines and with a little bit of drawing to conclusions added in for good measure.  If you’re going to read this to find out what happened between Tom and Katie – don’t bother – as it is all speculation as I don’t believe either have publicly  said why they decided to split ways.

If you’re just looking to find out some more about Katie, then check out the book, it’s interesting as long as you can read through the lines.  If you are a fan of Katie as I am, you’ll probably already know most of the details in the book anyway.

I am hoping that Katie can get her career back up and running after a few bombs of movies (Jack and Jill? Yikes) because she certainly is talented and seems down to earth and is a good person to look up to.

(The book also never mentioned that there were rumors early on that the newspaper articles where she said she had a crush on Tom Cruise were actually about a different actor. I remember that being a big deal that the reports were doctored when the two first got together.  I want to say the old articles were said to have mentioned Tom Hanks? Or maybe it wasn’t another Tom at all, I don’t recall.)

Who is Katie Holmes we all wondered when she defied all odds and stealthy left her older, richer more powerful Hollywood husband with her celebrity daughter in tow arriving in New York City to welcome arms, and a starring role on Broadway.Where did she get that independent streak?How did we under-estimate her?

Who is Katie Holmes?fills in the blanks.It tells the classic Hollywood story of small town girl who comes to tinsel town, ultimately fulfillsher every fantasy and discovers that there is a price to be paid for getting everything you desire.

Who is Katie Holmes?is more than another ‘true Hollywood story.’ It is the story of talent, tenacity and the will to succeed on her own terms. Katie Holmes speaks softly but, when pressed to the wall, she has proven that she can wield a big stick. Alternately insightful, dramatic and heartfelt,Who is Katie Holmes?is a straightforward look at the struggles and setbacks thatonly a person of character and compassion has the strength to overcome. Katie Holmes’ story is ultimately one of triumph and redemption. A true happy ending.