James from Big Time Rush at the CT Post Mall

Last month, James from Big Time Rush (aka my favorite member!) was announced as coming to the mall – he was doing one mall about 30 minutes from here on Saturday and then *MY* mall on Sunday! We never get anything fun here so I was so excited.  Then the event got postponed because he was stuck filming the finale of the TV series for longer than anticipated.

The events were rescheduled for this weekend and I decided I’d check it out.  James was there from 12-9 and the first 1,000 people there would get to meet him.  He’d be there from 12-3 and if you got a wristband you were guaranteed to see him.  Wristbands were going to be given out at 7am but there was no way I was getting up that early. (Sorry James) I rolled over to the mall about 12:30 and first took a couple of pictures from the level above. Then I saw they still had wristbands so I figured – what the heck – I’ll give this a try.

Standing in line is NOT easy for me since my balance stinks, and is of course even harder when I have no one with my to help me out.  About 1/4 way through I was wondering what I got myself into and just kept shuffling from one post of the velvet rope to another.  About halfway through (an hour in) I was more determined.  I got this! And it would be ridiculous to back out now.

And I did it.  I made it on to the stage and over to James and told him how I used to meet the Easter Bunny on that stage as a kid.  He laughed and said “oh so you know all about this then” and I was like “yeah but it was a lot quieter for the bunny”

And then – poof – after 2 hours of waiting I had about 10 seconds with James – they cut my wristband from my hand 🙁 and I was on my way home. 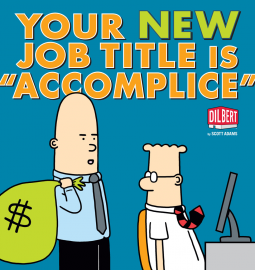 Your New Job Title is “Accomplice” is 130 pages of Dilbert cartoons.  Dilbert, like me, is an engineer.  Except his office seems to be a bit more off the wall than mine!  He has 2 coworkers that may be insane and his boss doesn’t seem to ever really know what is going on.  The strip has been around for 20 years and seems to still be relevant which I can’t decide if that is a good or bad thing about the way the office world has been for the last 20 years!  If you are looking for some good office humor, then definitely check out this book because you’ll probably find more than a few of the strips relatable, and if not, consider yourself lucky that you are in a great office environment! 🙂

Dubbed “the cartoon hero of the workplace” by the San Francisco Examiner,Dilbert is the cubicle-bound star of the most photocopied, pinned-up, downloaded, faxed, and e-mailed comic strip in the world.

As fresh a look at the inanity of office life as it brought to the comics pages when it first appeared in 1989, this 40th AMP Dilbert collection comically confirms to the working public that we all really know what’s going on. Our devices might be more sophisticated, our software and apps might be more plentiful, but when it gets down to interactions between the worker bees and the clueless in-controls, discontent and sarcasm rule, as only Dilbert can proclaim.

The man, the legend, the guy in the cubicle: Dilbert remains the quintessential office satire, and it’s back with Your New Job Title is “Accomplice”.  Join iconic office drone Dilbert as he wallows in the absurd misery of the stereotypical workplace, following the cues of an incompetent boss and working alongside his possibly insane co-workers Alice and Wally.

Dilbert exists in a working world wrought with darkly comedic office humor where declaring failure can be seen as a partial victory, and where an underachiever dreams of suing his boss for discrimination against the short, bald and near-sighted. Dilbert’s problems range from ridiculous work demands – “Stop everything you’re doing and build robots” – to more outlandish annoyances such as data vampires moving the office e-mail server to Transylbonia. Dilbert proves that after more than twenty years, the world of everyone’s favorite office cynic becomes only more uproarious, ridiculous and relatable.

What started as a doodle has turned Scott Adams into a superstar of the cartoon world. Dilbert debuted on the comics page in 1989, while Adams was in the tech department at Pacific Bell. Adams continued to work at Pacific Bell until he was voluntarily downsized in 1995. He has lived in the San Francisco Bay area since 1979.