Book Review: How to Talk Minnesotan 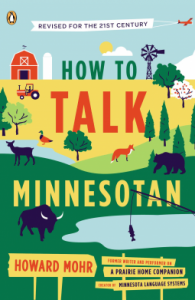 I’m not sure why I picked out this book to read – I’ve never been to Minnesota nor do I have any plans of visiting Minnesota, but I was aware that they had their own type of accent or dialect or whatever you want to call it, so I guess that is what ultimately ended up interesting me.  But then I just couldn’t get into the book.  I got about halfway through skimming most of it.  While interesting, it just seemed to be a lot of information I didn’t find myself needing.  (Watch, now I’ll end up needing to go to Minnesota and be totally embarrassed by not understanding the local lingo)

If you are from Minnesota, frequent Minnesota or may be planning to go to Minnesota, then I think that this book may be interesting to you.  Or it should at least give you a few laughs. (You bet.)  It just seemed to go over my head.

For the past few decades, Howard Mohr’s HOW TO TALK MINNESOTAN (Penguin; On Sale: May 28, 2013; ISBN: 978-0-143-12269-2; $15.00; 288 pages) has helped visitors to Minnesota avoid embarrassing “uffda situations” (as you might say if you speak the local dialect) by sharing the social nuances, linguistic oddities, eating habits, and customs unique to the Land of 10,000 Lakes. Now, in time for its 26th anniversary, Mohr has revised and updated the long-time favorite to allow for the many technological and cultural changes that have occurred since its original publication.
Addressing the savvy, twenty-first century traveler, Mohr advises Minnesota visitors on such modern practices as tweeting, Facebook, cell phones, and the myriad of developments in Minnesota behavior and culture since the book’s first publication in 1987. Mohr’s hilarious guide is brimming with useful advice, including deciphering Minnesota body language; where to find love in Minnesota (at the Laundromat, garden center, and the parking lot of the local mall); and, of course, “how to talk Minnesotan” by using local phrases like, “you bet,” “heckuva deal,” and “yeahbut.” There’s also a great chapter on eating in Minnesota, enabling you to understand a system that consists of 6 actual meals throughout the day (three large meals plus three “little” lunches); and the vast array of hotdishes available, including such winners as the “ketchup surprise hotdish” and the “garbanzo bango hotdish.” He also teaches you the art of saying “no” to food in Minnesota, which can be tricky since it is frequently used to get more food without appearing greedy, so the uninitiated may be served with more rhubarb-strawberry pie than they could ever eat if not careful.

Known for his dry humor and distinctive voice, Howard Mohr won over millions of fans on Garrison Keillor’s hugely popular radio show “A Prairie Home Companion.” Between 1974 and 1987, over 200 of Mohr’s scripts, “commercials,” and spots aired on the program, including “Raw Bits,” “One Minute Romance,” and “Pentagon Overstocks.”

In addition to being a writer and performer on “A Prairie Home Companion,” Howard Mohr has also created two long-running musicals based on HOW TO TALK MINNESOTAN. Twin Cities Public Television filmed a popular award-winning version of Mohr’s book in 1991. He lives on five acres of southwestern Minnesota prairie in the town of Cottonwood.