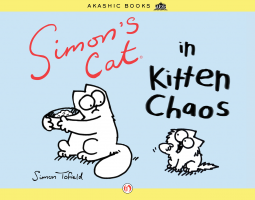 Simon’s Cat is not something that I had heard about before I saw this book, but I guess I am missing out because it is a bit of a YouTube phenomenon.  At first I thought that this would be a rather short book, but was surprised to see it over 200 pages.  However, it is entirely illustrations of the cats and no words.  You can interpret the story as you see fit.  And man, does this cat get in to some situations.

At the end of the book, there are some tutorials on how to draw Simon’s Cat, Simon’s Kitten, a rabbit and some other characters that are in the book which I thought was a nice touch.

Half the size, double the trouble. Simon’s cat has a new little friend who may be even more accident prone.

With over 200 million hits on YouTube, Simon’s Cat is a genuine word-of-mouth phenomenon. Fans from all over the world have fallen for this adorable but anarchic feline who will do just about anything to be fed. Simon Tofield’s beautiful drawings and warm humor come alive on the page in this irresistible humor book—an outgrowth of the enormously popular short films featured on YouTube.

Like all great cartoon creations, from Peanuts to Asterix, from Garfield to Tintin, Simon’s Cat has continued to evolve by introducing new characters and new story lines. After the runaway success of the first two books (Simon’s Cat and Simon’s Cat: Beyond the Fence), Simon welcomes a cuddly new addition to the family in the form of Simon’s Kitten, who is sure to delight Simon’s millions of fans.