Wheel of Fortune live in NYC! 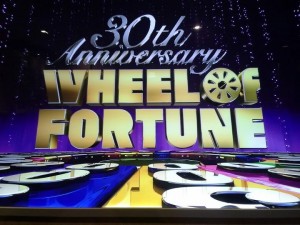 When I had found out that Wheel of Fortune was coming to NYC, I immediately entered for tickets.  They had 4 days available and you could only select one date/time unless you selected that you had no preference.  Of course, no preference would give you the best odds at getting tickets, so that is what I chose.

We ended up getting 4  tickets for the 2pm Monday afternoon show.  We got there around 1 and the line was already wrapped around the block at Madison Square Garden (the show was being taped at the Theater there) and it was FREEZING and we were supposed to be getting a snow storm that night.

Although doors opened at 2, they started moving us in early, but we were herded like cattle through line after line and finally ended up getting in to our seats at about 3.  Jim Thornton, the announcer for the show, came out to talk to us and even sang a song (since we were so close to Broadway he said he had to).  Then a couple of the local news casters came on stage and talked to us a bit as well.

We were in the front area behind the press, but unfortunately could barely see Vanna and couldn’t see the letter board at all (they had monitors set up though so we could see the puzzles, but most of the time this was blocked by the Jimmy camera – is that what it is called? The one that swings?) but sometimes it was up on the middle screen too so we could see it there.

We weren’t sure how many shows they were going to film.  After the first show, Pat and Vanna came to talk (but Vanna had no mic so she just said hello into Pat’s chest) and then Pat said to hang tight they would be getting changed and coming back for another show!

Vanna ended up coming out and talking to the crowd a bit and answered questions and then it was time for the 2nd show.

After the 2nd show, a lot of people left because the snow was starting and it had been pretty long.  We were told to stay in our seats and that if we stayed for the 3rd show we would get a blinky pin!

Pat came out and went through the crowd shaking hands and said “vote for me, vote for me, I’ll let you drink however much soda you want.” Since that is a big topic in NYC about banning large sodas.  Then he pulled a girl from the audience and took her down to meet Vanna and she got a little box with goodies in it.

And then it was time for the 3rd and final show!  It was Best Friends week and the shows will be airing May 13, 14, and 15.  I can tell you that none of the winners got the bonus round puzzle.  And there were a few rounds where most of the audience knew it, but it went around and around and around and it was SO frustrating to not just shout it out at them.  (If you yell it out and they can hear it, the puzzle gets thrown out and then they have to do a different one, so you really have to be quiet)

Overall, it was a long day but a lot of fun and I am glad that I can cross seeing Wheel of Fortune in person off of my bucket list 😉