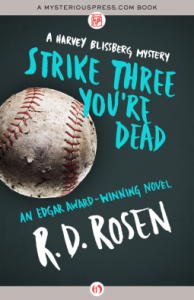 Strike Three Your Dead is about the Providence Jewels, a baseball team that play in Providence Rhode Island.  Harvey Blissberg, the center fielder, discovers one of his teammates, Rudy Furth, a relief pitcher, dead in the whirlpool tub in the club house.  Harvey spent his nights on the road in hotels with Rudy as they were roommates.  He has no idea who would want to do this to him, but since he found him he becomes a suspect – as does the entire rest of the team.

Harvey doesn’t seem to be too impressed with the job that the cops are doing in tracking down Rudy’s killer, so he takes matters into his own hands.  He goes to Rudy’s apartment and finds out all sorts of things he never knew about the guy.  Slowly the story starts unfolding and he thinks that he may be on to something.  Finally, his brother says something to him that triggers Harvey’s brain to figure out exactly what was going down.  Except that the person who killed Harvey has been hot on HIS trail following him around and knew how close he was to figuring things out.

Can Harvey put all the pieces together and let the cops know before the killer catches up with him? He’s already had 2 strikes against him – a dead rat in his locker and a note in his glove to stop playing private eye.  And you know what they say.  Strike Three, You’re Dead.

This was a great book – I love murder mysteries and to throw in baseball and the team as an additional set of characters was great because you really had no idea who on the team it could be or even if it was any of the guys on the team.  They all could have had their own reason’s for not liking Rudy.  I never really had an idea of who did it until closer to the end of the book and pretty much figured it all out as Harvey was figuring it all out.

A slugger struggles with an empty ballpark and a murdered teammate

The Providence Jewels, an American League expansion team, have been taking a beating all season. Worse, relief pitcher Rudy Furth has just suffered a beating of a more lethal kind—and been left to die in the clubhouse whirlpool among whispers of mob corruption and violently lovesick fans.

When the police investigation stalls, veteran Providence center fielder Harvey Blissberg, who knew Furth as well as anyone, decides to play detective. While trying to keep his eye on the ball, and his head above water with the spunky, beautiful sports newscaster Mickey Slavin, Blissberg quietly stalks Furth’s killer through major-league locker rooms and the dark streets of Rhode Island’s capital city. Lots of ballplayers keep their batting averages above .300—but how many have chased a murderer at the same time?