Book Review: The Boyfriend from Hell 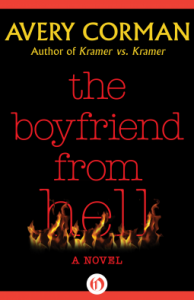 The Boyfriend from Hell follows Veronica “Ronnie” Delaney.  In the beginning of the book she breaks up with her chef boyfriend because he was, well, no good.  She is a journalist and gets assigned to covering a satanic cult based out of New York.  The leader of the cult asks her to dinner, but not wanting to get wrapped up with another bad boy, she declines.

In doing her research, she meets Richard who writes and talks about Satan and they develop a relationship.  Then crazy things start happening – a dead cat is shipped to her house among other things that leads her to believe the cult leader or one of his members is after her.  The police don’t seem to really care.

Meanwhile, Ronnie gets the offer to write a book on satanic possessions and she accepts.  Even more weird stuff starts happening and Ronnie starts to think that she may be possessed.

Is her boyfriend really from hell?

This was a really enjoyable thriller, even though the book title kind of made me feel one way towards the boyfriend as I was reading it. (I won’t say if that feeling/assumption was accurate or not.)  It takes place in New York and mentions Connecticut as well so that is always fun.

Veronica Delaney didn’t intend to fall for another bad guy, especially not one who just might be evil incarnate . . .


Veronica Delaney is a bright and beautiful, young New York journalist who has had hard luck romantically and professionally. Her latest boyfriend left her for fame (and another woman, of course), and her latest assignment has her covering a bizarre satanic cult. But while following the story, Veronica soon meets the charming, polite, and devilishly handsome occult historian Richard Smith. Soon she’s embroiled in an exciting affair—at least until strange relics begin to appear on her doorstep and things start to go terribly wrong. The Boyfriend from Hell is a funny, astute psychological thriller about the mysteries of attraction and love’s power to hijack our good sense. This ebook features an illustrated biography of Avery Corman including rare images from the author’s personal collection.