March 7, 2013 by ConcertKatie No Comments 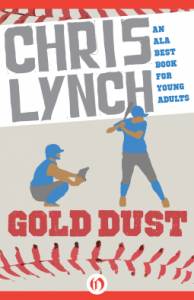 Gold Dust is about a 7th grader named Richard who LOVES baseball.  When a new student, Napoleon, comes to the school, Richard takes him under his wing and tries to get him interested in baseball too.  Napoleon would much rather play cricket, but the more he plays with Richard the more they realize that he is a natural.

The book takes place in 1975 and Richard is obsessed with Fred Lynn and Jim Rice – the Gold Dust twins.  He is convinced that him and Napoleon can become the next Gold Dust twins (but they’ll probably need a different name then.)

For a while, Napoleon goes along with the baseball dream, but slowly he begins to realize that he may have some dreams of his own.  Then what does he do? And what does Richard do?

This is a relatively short Young Adult book that I think a lot of boys (and girls too!) would enjoy.  Richard loves the Red Sox but I think that any kid interested in baseball would enjoy reading it and it gives some great life lessons as well.

Baseball-loving seventh grader Richard has hopes of turning himself and the new kid, Napoleon, into the best baseball players Boston has seen since the Gold Dust Twins

“As long as you have baseball on your side you can overcome anything.” Seventh grader Richard Moncreif is convinced baseball will ease newcomer Napoleon Charlie Ellis’s transition to life in Boston. Napoleon is unlike anyone he’s ever met: poised, well educated, and a cricket player from the Caribbean. Napoleon is one of the few black students at Richard’s school, where racism is pervasive. But Richard believes that he and Napoleon can get through any hardship and become the next Gold Dust Twins, just like the famous pair of Red Sox rookies from 1975. After all, Napoleon is a natural athlete, and Richard knows everything anyone could possibly know about baseball. He just needs Napoleon to play along.

This ebook features an illustrated biography of Chris Lynch including rare images from the author’s personal collection.