March 9, 2013 by ConcertKatie No Comments

Couple that with a soft touch handle and compact oval cartridges that fit the contours of a woman’s body and you can see why the Shick Hydro Silk razor was last year’s most awarded new razor. (Based on 2012 Beauty Awards top magazines.) Make the simple switch to Schick Hydro razor in 2013. (The silky smooth legs will follow, trust us.)

The Schick Hydro Silk is the latest product that I’ve got to try out – for FREE – just for being a bzzangent.  This razor has 5 blades, I don’t think I’ve ever used one with so many blades before.  When I took it out of the package I was a bit intimidated, but once I actually started using it I fell in love!  I did cut myself a couple of times, but that’s pretty typical for me. (Though I don’t know if this was all in my head or not – I don’t think that the cuts bled as much as usual nor did they sting as much as usual. Again, I may just be nuts. Or maybe the razor is that awesome.)  Once I was done I had a great, close shave and my legs were left feeling silky smooth. 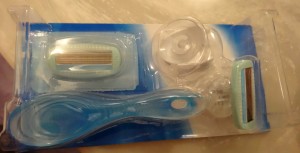 Each razor package comes with 2 cartridges, one to use right now and one to save for later.  It also has a shower hook included which makes it super convenient.   It is also available in a disposable version, if that is more your thing. 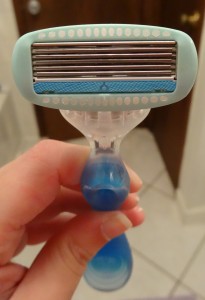