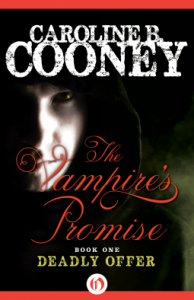 I typically try and avoid books with Vampires in them, but since I had enjoyed Caroline B Cooney’s “Wanted!” so much, I decided I would give this one a try since it was also by her.  The book is about Althea, a high school girl who lives in a house that many think is haunted.  While there aren’t any ghosts, there is a vampire in the tower in the attic that she accidentally sets free.  Althea sits alone at lunch and the other kids at school don’t pay much attention to her.  She’d love to be popular and be a cheerleader and the vampire promises that he can make this happen for her.  There’s only one problem – in order for her to be popular she has to bring him victims.

Althea loves her new found popularity – she has a boyfriend – a football player boyfriend at that and she has made the cheerleading squad after Celeste had to quit due to being too tired and weak to be on the squad anymore. (I wonder how THAT happened?)  She is loving it, but the vampire keeps demanding more and more from Althea in order to keep her popularity going.  Althea doesn’t want to meet his demands any more and just like that he is able to take it all away.  Her car won’t start and after walking to school everyone acts like she doesn’t exist again.  Althea wants it all back and she thinks that she is willing to bring more victims to the vampire – but will she have a change of heart?  Is losing her new friends to the vampire worth the popularity and cheerleading and boys?  She has to figure out a way to keep her popularity and get rid of the vampire once and for all.

This was a quick read, but a good read, despite the fact that I am not a vampire fan.  It is also the first book in a series of 3, and I am looking forward to seeing what happens in the next books and whether it will follow the vampire, Althea or have completely new characters…

Althea’s dreams are about to become her nightmares
Althea has always been a sweet, kind girl. In middle school, she had a group of friends to hang out with. She was on the softball team, took gymnastics, and won ribbons for horseback riding. But high school is horrible for Althea. She doesn’t make the cheerleading squad. Her group of friends splits apart to form new cliques, and Althea is left to sit alone at lunch. That is, until she discovers a vampire living in the attic tower of her family home. A vampire who can make her dreams come true: a spot on the cheerleading squad; popularity; a boyfriend. All the vampire wants in return is a small sacrifice, and Althea is in too deep to back out now.�The first book in Caroline B. Cooney’s Vampire’s Promise trilogy reveals the danger behind the door of the Shuttered Room . . .�This ebook features an illustrated biography of Caroline B. Cooney including rare images and never-before-seen documents from the author’s personal collection.