November 13, 2012 by ConcertKatie No Comments 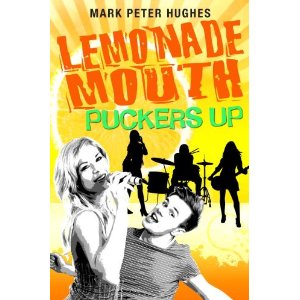 Lemonade Mouth Puckers Up is the sequel to Lemonade Mouth, both written by Mark Peter Hughes.  Lemonade Mouth has also been made into a Disney movie.  Going in to reading this book – I had not read the first book nor had I seen the movie (aside from a few commercials and maybe a clip here and there while watching Disney in passing).  All I really knew was that Lemonade Mouth was a band formed by some kids who go to school together.  A lot of the details about the books and the band can be found at http://lemonademouth.com.

The style of the writing in the book is interesting.  It has portions written by different band members and other people associated with the band, portions that look like it is a movie script or a play, and then regular narratives as well. Usually I don’t like when things change around like that, but somehow the set up of this book works.

The story follows the band on their summer break – getting signed, being on TV shows, starting a revolution over being yourself and not conforming to the media’s views on what is acceptable, leaving their label as well as personal struggles in the band members lives.  Olivia’s mother is in the picture after being away since she was 2.  There are relationship struggled, a family friend from India coming to visit and so much more.  Definitely enough to keep your attention so you won’t be able to put the book down! I had no problem reading it all in one sitting, and it is just under 300 pages.

While this is a book geared more at teens, it’s no secret I enjoy the occasional YA novel, especially if it revolves around a band! I think I am going to have to go back and read the first one (and check on the movie as well) and hope that there are plenty more books in store about Lemonade Mouth!

Becoming Rhode Island’s most legendary band was just the beginning.

This is what happened after five outcasts in Opequonsett High School found each other, found the music, and went on to become Rhode Island’s most influential band. What’s next for this group of musical misfits? Whatever is it, it will be nothing short of revolutionary.

MARK PETER HUGHES was born in Liverpool, England, and grew up in Barrington, Rhode Island. Mark’s obsession with music has led to many ups and downs. Setbacks include getting ejected from eighth-grade music class for throwing a spitball and the heartbreak of learning that the accordion has no place on a thrash-metal stage. Success came later when Mark fronted an alternative-rock band. Lemonade Mouth is Mark Peter Hughes’s second novel. Learn more about the book and visit Mark at MarkPeterHughes.com and LemonadeMouth.com.

« Previous post
Book Review: Dr Seuss: The Cat Behind The Hat
Next post »
Naughty is the New Nice!