November 27, 2012 by ConcertKatie No Comments 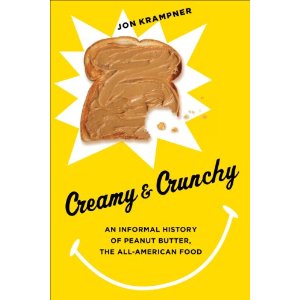 Peanut Butter. I love it and many others do as well.  I don’t know that I ever would have gone out and bought a book on the history of peanut butter myself, but when I saw it was available for review through NetGalley I figured I’d give it a go.  I was shocked that the book, on the history of a food product, could be 300 pages.  But as I continued reading I realized there were a lot of different paths peanut butter took through different brands and all of them had to be represented.

Mixed in throughout the book are various peanut butter recipes as well. Peanut Butter coffee?  Cheesecake? All of them sound like they would be delicious and maybe I’ll have to try my hand at making one or two. (My peanut butter specialty is fudge though!)

My favorite has to be the “peanut butter music” chapter – which of course mentions peanut butter jelly time and the poem by Shel Silverstein which I remember reading as a kid.  I also liked the chapter about how Peanut Butter is saving the world and is udes to feed kids in third world countries.

Im not sure why anyone might be looking to read a book on peanut butter – but if you are in the market for one – definitely check out Creamy and Crunchy!  I received a free e-copy of this book from the publisher through NetGalley in order to write this review.

The first popular account of one of America’s most beloved foods (consumed by more than seventy-five percent of the population), Creamy and Crunchy is a comprehensive and entertaining history of peanut butter’s development and integration into the American diet. Richly illustrated and filled with anecdotes and facts culled from unusual and engaging sources, the book is a mix of interviews, research, travels in the peanut-growing regions of the South, personal histories and recipes, focusing on the manufacture of the food from the 1890s to the present, while also covering its cultural, nutritional, and even molecular evolution.

Jon Krampner begins with peanut butter’s creation and the scramble to capitalize on its early success. He provides in-depth looks at Peter Pan, Jif, and Skippy, and why Peter Pan, one of the first big brands to manufacture and market the food, is now a distant third behind market leaders Jif and Skippy. He examines the plight of black peanut farmers; the creation of the “Choosy Moms Choose Jif” campaign; the role of peanut butter in fighting Third-World hunger; and the salmonella outbreaks of 2007 and 2009 that threatened to derail peanut butter’s sacred place in the American cupboard.

Krampner investigates the resurgence of natural, or old-fashioned, peanut butter; the five ways today’s product is different from the original; why Americans love peanut butter so much more than people from most other nations; and the future trajectory of the industry. He also provides tips on peanut butter etiquette (if eating it straight from the jar, use a teaspoon – unless your girlfriend has just brutally dumped you, in which case a tablespoon is considered acceptable) and concludes with a “best of” list featuring top, taste-tested peanut butters and a timeline of key figures and events. A dedicated web site maintained by the author, www.creamyandcrunchy.com, contains additional images and information.

Jon Krampner is the author of The Man in the Shadows: Fred Coe and the Golden Age of Television and Female Brando: The Legend of Kim Stanley. He received an A.B. in English literature from Occidental College and a master’s degree in journalism from the University of Wisconsin at Madison. He lives in Los Angeles.