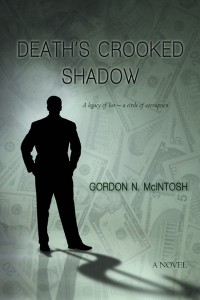 Death’s Crooked Shadow by Godon N. McIntosh is a legacy of lies – a circle of corruption.  The book is about Doug Sutherland, a real estate developer living in Chicago.  Things seem to be going pretty well for him, but then the workers who are restoring an office building of Doug’s (once belonging to his father) discover a human skull in a column, his life gets a bit out of control.

The skull belongs to alderman Danny Delaney who went missing fifteen years ago.  Once this is uncovered, Doug gets a call from someone who has a notebook of Danny’s with information about money changing hands and tapes. Doug’s father’s name is listed in it among many others.  Doug doesn’t want anything to do with it and suggests the caller contact a newspaper reporter instead.

More and more people involved in this case end up murdered and Doug is trying to find more things that his father left behind to try and solve this mystery on his own – all the time fearing for his life because he never knows when whoever is killing everyone is going to come after him.

This book is 107 chapters, but many are just a page or two long. It is about 350 pages and took me about 3 days to read as there is a lot of different details to follow.  I also think that I stretched things out a bit because I didn’t want the story to end.  It seemed everywhere Doug turned, there was another clue to involve someone else in this story – and he even found out secrets about his father that he did not know about before.  The book was well written in that I had no idea what was going to come at the end until I read it – a lot of times I can figure these things out beforehand (which makes finishing the book rather boring).  There were also a lot of great characters in this story and I would recommend it to anyone who likes a good mystery.

I received a free copy of this book from the author in order to write my review.

Real estate developer Doug Sutherland thinks it is just going to be another sweltering day in Chicago. But when the foreman restoring his late father’s rundown office building discovers a skull and human bones incased in a crumbling Greek column, Sutherland is suddenly propelled into a cauldron of greed, sadism and murder.

The last thing Sutherland needs is bad publicity. When he learns the victim is notorious alderman Danny Delaney, however, he realized a fifteen-year-old mystery is about to be solved– and that now, his deceased father is one of the prime suspects. Then the murdered man’s notebook and videotapes suddenly surface, and Sutherland discovers that his father had more secrets than he ever realized. As he is relentlessly harassed for what he might know — endangering both his life and his business– Sutherland must convince everyone that he knows nothing. Unfortunately, no one believes him.

As a desperate Sutherland collaborates with an ambitious reporter and his calculating sister in a pursuit strewn with murder victims, he soon finds out that trusting the wrong person can lead to dire consequences.

Gordon N. McIntosh earned a master’s degree from the University of Chicago and subsequently enjoyed a successful career as a commercial real estate executive. Now retired, he divides his time between homes in Chicago and Key West, where he loves pursuing his true passion — writing fiction. This is his second novel.