Book Review: Stand By Me 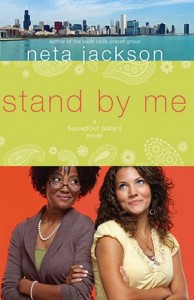 I’m going to be completely honest and let you know that I only chose to read this book because the main characters name is Kathryn – which is my name.  Sometimes when I choose obscure reasons to read a book, it comes back to haunt me and the book is terrible, but this time it worked out.

The story is actually 2 stories in one – one is about Kathryn, or Kat, as she goes by and 3 of her friends who are students at Christa University.  The other story is about Avis Douglass who lives with her husband, has 3 daughters and is estranged from one of them.

Their lives cross paths when Kat and her friends start attending church at SouledOut, where Avis is a worship leader and heavily involved in the church.  At first, Avis is incredibly against these kids coming to the church, but through a series of incidents (no doubt guided by God), she comes to realize that Kat doesn’t mean any harm and together they can help each other out with their shortcomings in life.

The book alternates chapters between Avis and Kat, although some chapters they are both together at church or at the condo complex where they now both live.  I have to say, I really enjoyed the character progression of Avis – in the beginning I could not stand her because she was being so judgmental towards the college kids, but by the end she realized that maybe they were sent to “bother” her for a real reason, since they really helped her out a lot with stuff she was worrying about!

The book is 43 chapters, but a pretty easy read and the chapters aren’t really all that long.  Definitely recommended for anyone who enjoys christian fiction!

Sometimes the person you most need is the one least like you.

Kathryn Davies is a bright young woman from a prominent Phoenix family. But after making a leap of faith at a Christian music fest, dropping out of med school, and moving to inner city Chicago, her family has all but disowned her. Kat’s enthusiasm for her newfound faith tempers the sting of their rejection.

When Kat discovers SouledOut Community Church, she longs to become a part of the multi-cultural church family. But her tendency to say whatever she’s thinking and her eccentric ways step on the toes of nearly everyone she meets—especially Avis Douglass, a woman she admires but who seems distant.

Avis is known for her mature faith and her reliance on listening to God more than people. Married to a kind and successful businessman, she is the principal of one of Chicago’s highest performing elementary schools, and a founding and active member of SouledOut. But the country’s economic downturn has thrown both her and her husband’s jobs in question. And Avis hasn’t heard from her youngest daughter in months—an estrangement that gnaws at her every day. Where is God in all this?

Kat’s flamboyant zeal for living a “radical” Christian life is a stark contrast to Avis’s quiet crisis of faith. But in God’s own mysterious ways, the two women discover they need each other in ways neither of them expected.