It is time for the battle rounds – part 2!  The teams will continue to be cut in half and then it is on to the live rounds!  Like the new banner? I don’t. HAHA. I wanted to have some sort of image though so I threw this together and it didn’t quite turn out like I would have liked it.  It will have to do until I get free time to make a new one (the show will probably be over by then!)

Geoff vs Sara
Chain of Fools – Aretha Franklin
My Pick: This was tough, I really liked them both but I think I’d pick Sera.
Christina’s Pick:  Sera

Jamar vs Jamie
I Want To Know What Love Is – Foreigner
My Pick: Jamar
Cee Lo’s Pick:  Jamar

Why do I never seem to be on the same page as Blake? Everyone else I was right on with picking.  Another battle round next week! I’m looking forward to it. 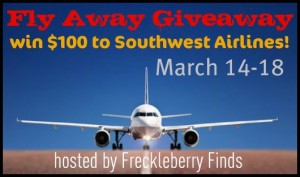 How is your Spring Break going? Would it be better if you were somewhere tropical and warm? Well lucky you! I teamed up with some other bloggers to bring you a giveaway where you can win $100 to Southwest Airlines! That oughta help you out with a dream vacay!

Enter to win below, and good luck!